The big picture is one of government policies crafted to punish individuals for seeking asylum and encourage their departure. The justifications of ‘avoiding the creation of a magnet effect’ and ‘preventing the opening of flood-gates’ are cunningly raised to stoke fears and draw support for the current treatment that borders on social cleansing.

Propaganda brainwashes the minds and pollutes the hearts of gullible citizens who unwittingly (or not) are imperceptivity conditioned to homogenize refugees’ narratives and motives into an amalgam rich with xenophobia and poor in human rights. This reduces refugees to an annoying inconvenience for otherwise comfortable residents, some of whom might make a living in the asylum field.

On 2 April 2015, two refugee women reported recent experiences with service providers who used a malicious tool to abuse and deprive them of respect – words. Both were women, both were mothers, both were gentle and soft-spoken and unlikely to kick up a storm in protest, which conditions demand we listen carefully to their complaints.

A South Asian mother of one, complained to her case worker (name withheld) about the quality of food collections. She expressed her views politely, requesting improved provisions that were not always the cheapest available. The mother lamented that foodstuff for children had little nutritional value and lacked variety. She said she was told: “Why you complain? It is free! You should be happy with what you get for nothing.”

An African mother of three, reported to her case worker that some food was contaminated. A Ziploc bag containing a box of macaroni was produced as evidence. The package was home to two undesirable creatures, one dead and one alive – cockroaches! The case worker presumably handled the issue with the grocery shop concerned. At the next food collection the mother had another unpleasant surprise. Instead of an apology, she received threats. She said she was told: “Why you give me trouble? Did I give you trouble? So now you want trouble for your family?”

Refugees need not be treated as high-value customers at some luxury shop. Yet they are customers nonetheless. Case workers earn salaries to perform a welfare job on behalf of the Hong Kong people. They need not be grateful, but they ought to be respectful. It is hoped more emphasis will be placed on professionalism that might build understanding and ultimately improve services.

The shopkeepers and owners of the seven grocery shops appointed by ISS-HK run profitable businesses. They are not doing charity by any means. Presumably they earn a decent profit on every item sold, including the contaminated box of macaroni. The outcome might have been different if the package had been given to the Food and Environmental Hygeine Department (FEHD), which Vision First advises refugees to approach in such cases.

Why should refugees be intimidated when raising legitimate complaints? Why should a mother be targeted for reprisal for speaking out?

Is it right for a government contractor, financed by hundreds of millions of dollars from the Social Welfare Department, to transfer a 3 year-old child into the care of a destitute refugee woman without adequate support? What if the woman met the girl only a few days earlier?

Several months ago Vision First raised a complaint with SWD about a little girl who showed up at our office unwanted by the refugee carers who were stuck with her after the mother was jailed for 18 months for working illegally, possibly to raise a daughter in this expensive city.

Presumably the SWD has operating procedures for its child services department tasks to provide assistance for young children whose parents are incarcerated and who, after the age of 3, are no longer allowed to stay in prison with a parent. This is what happened to Precious.

Two refugee friends of the incarcerated mother anxiously sought our assistance and we raised our concerns with the SWD, as we didn’t have resources to care for children, particularly of such a young age without parents. The women complained that ISS-HK had entrusted them with Precious without providing adequate assistance to look after and care for her day and night.

Last week a third refugee mother produced an ISS-HK document stating, “This care giving agreement is made out of good will and compassion to the child as there is no other person or institution that can look after the child while her mother is restricted to provide care and custody in view of detention. This agreement includes care giving to the child, collection of her food … accessing health care facilities when the child needs medical treatment, escorting child in reporting to ISS-HK for contract renewal.”

The agreement fails to mention the countless tasks a parent performs in child-care: cooking, cleaning, bathing, clothing, playing, talking, teaching, putting to bed … and generally paying full attention to the wellbeing and happiness of children. Any parent will agree that caring for children is a never-ending obligation typically performed at great personal sacrifice.

Why was Precious entrusted to a refugee women she had never met before? Assuming the women is wonderful (she is), is it right for a child to live in a tiny partitioned room without ventilation, kitchen, bathroom or even a functioning TV? Is the women expected to cook, bath and cloth and share a single bed with a little girl who is not her daughter? Is she expected to provide motherly care as a destitute refugee without financial assistance? How can the women travel on her daily routine without even a child Octopus card?

Would this be an acceptable treatment for resident children in the care of SWD?

We, Vision First Limited, re-published on our website on the 24th March 2015 an article by Refugee Union entitled “RU prepares to bury a comrade” which stated, “We salute a Comrade Killed by our Oppressor ISS-HK” referring to the death of Mr. Sivaharan.

We accept that the allegation ISS-HK killed Mr. Sivaharan is unsubstantiated, inappropriate and ought not to have been published. We hereby unreservedly withdraw this allegation and wish to apologise to ISS-HK for any inconvenience and embarrassment caused by it.

Asylum seekers and refugees rely entirely on the Hong Kong Government and Social Welfare Department (“SWD”) distribution of government assistance provision through International Social Services (ISS-HK). They are not allowed to work and are sentenced to 15-22 months imprisonment if arrested working. They have no savings, no income, no bank account, nor can they rely on social networks, NGO assistance or help from family and friends. Under these conditions, they are not afforded adequate support to meet their most basic needs. While they struggle to survive, the situation is degrading, humiliating and in breach of their rights as persons granted non-refoulement protection in Hong Kong. Over the years they have repeatedly requested to bring their assistance to an adequate level, but they have been systematically and incomprehensively left in a destitute state. The limited and insufficient assistance they receive makes it impossible for them to survive on a day to day basis, particularly in the face of soaring rents.

Vision First request that the Hong Kong Government, the Security Bureau and SWD fulfill their obligation to provide for asylum seekers and refugees’ basic financial, material needs or otherwise. These needs include, but are not limited to, appropriate quantity and quality of food assistance, payment of full rent and utilities, payment of full rental deposits to landlord, daily necessities like cooking gas, clothing, health care, transport allowance for required trips always payable in full and in advance. We request that ISS-HK sign the Tenancy Agreements as refugees have no savings or income to pay rent balances every month.

We formally request that a public hearing be held to discuss these matters that concern all persons requesting and having been granted international protection in Hong Kong, who in March 2015 amounted to over 10,000 individuals, increasing by 300 every month.

Vision First further request that a Task Force be established to investigate why persons requesting and having been granted international protection in Hong Kong have been left destitute despite a system being in place to disburse government funding to prevent this condition from happening. Such policy failures have caused refugees needless and unreasonable physical, mental and psychological suffering.

Vision First invites refugees to download and complete the form below that will be filed at the Complaints Office of the Legislative Council Secretariat over the coming weeks and months. 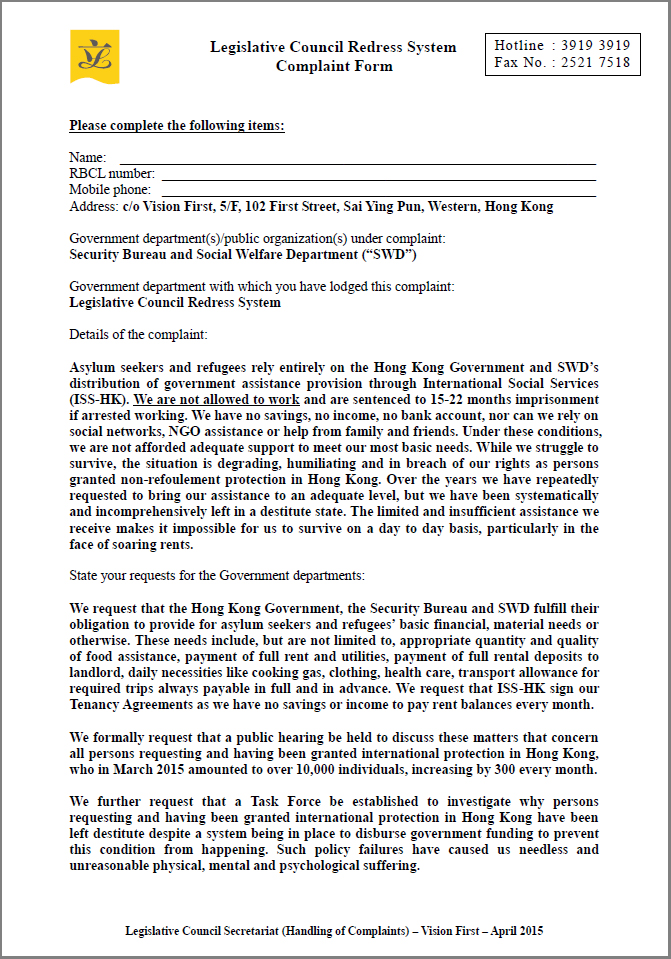 The hidden and dangerous refugee slums of Hong Kong

The treatment of refugees by SWD can lead to criminal acts

It needs to be considered that the way in which Hong Kong’s Social Welfare Department (SWD) treats refugees can lead to refugees committing criminal acts. This will be explained by defining and discussing the criminological theories of opportunity and labelling and explaining how current SWD policies might lead refugees to commit criminal acts.

Opportunity theory can be defined as, “offenders having inadequate or inappropriate means or opportunities to achieve certain goals relative to other people in society” (White, 2014, p. 71). Considering refugees in Hong Kong using this theory, it can be argued that crime is generated by this type of treatment. For example, if refugees don’t have adequate means of living and opportunities to better themselves through education and work, there is a chance they will try to better themselves through ‘illegal’ activities such as work performed without authorization. As reported in the South China Morning Post, “asylum seekers awaiting the outcome of their claim with the Office of the United Nations High Commissioner for Refugees (UNHCR), recognised refugees awaiting resettlement to another country and torture claimants are banned from doing paid or unpaid work” (Chan, 2013).

Looking at this through opportunity theory, it can take years for refugees to be screened and possibly resettle in another country and, while waiting, they cannot work to better themselves and earn money for their family. Using this example there is a likelihood that if a refugee family needed money for rent, food, clothes or the children’s school and if the only way to achieve this was stealing or working illegally, they would have no choice but to commit criminal acts to meet what most people would agree are basic daily needs, in this case, unmet by the SWD.

Labelling theory can be described as society labelling an individual, which in turn can cause the individual becoming influenced by the label and acting out that labelled behaviour (Holmes, 2012, p. 250). It can be argued that refugees can be stigmatised due to the current system and laws in place. For example, refugees can be seen by the Hong Kong public as being dependant on the SWD and not searching for jobs, as they are not aware of the current government policies which prohibit them from working. This type of stigmatization can cause refugees to be always seen by the public as individuals who are content being dependant on welfare and not wanting to work. This can lead to refugees believing social change will never occur and becoming influenced by the label and turn to conducting criminal acts such as theft and working illegally.

In conclusion, as shown through the criminological perspectives of opportunity and labelling, the current policies of the HK SWD can cause refugees to commit criminal acts due to them not enjoying adequate support and being labelled by the general public as continuously dependant on welfare and not looking for employment. To create a stronger relationship between refugees and the government, refugee policy needs to change to minimise the potential of criminal acts being committed by refugees trying to meet rent payments, purchase essential foodstuffs and making ends meet.

Currently in the media:

Government Expenditure For Claimants Is Over $600 Million