Eight homeless refugees, including two children, had an evening stand-off at the ISS-HK Mongkok branch. Rising rents are pushing refugees against the ropes and many are becoming homeless. With no savings, income or salary and inadequate support from ISS, the situation is troubling as more destitute refugees become homeless. While every homeless case is disturbing, families should not be sleeping in the streets. Ibrahim arrived from Togo in 2005 and Immigration has not started his torture case yet. Realizing the asylum process takes years, in 2009 he persuaded his wife to join him and they have had two children in Hong Kong.

For several years they lived in a rundown flat in Cheung Sha Wan, struggling monthly to raise 900$ balance between 4500$ rent and 3600$ paid by ISS. Despite pawning the wife’s wedding necklace – a gift from her mother – and borrowing from anyone who listened, overdue rent increased and an irate landlord sued at the Lands Tribunal. Ibrahim begged ISS to assist but his pleases fell on deaf ears despite the presence of his two young children. After a few months the inevitable happened: an eviction notice was issued, the police enforced the court order and the helpless family was on the street. In despair Ibrahim approached Vision First and a lawyer took the case pro-bono, though the legal process was too slow to keep the home. With no option, yesterday afternoon the family took their few belongings to ISS Mongkok office ready to camp out till a viable solution was found. At this point the tragedy became a comedy.

With a reporter from am730 (daily readership of 960,000), Vision First witnessed the spectacle that unfolded over five confrontational hours, during which the indifference of ISS case workers was apparent. This 200,000,000$ giant is a helpless child when confronted with the unexpected, like rabbits dazed by the headlights of an oncoming truck. A dozen staff tried their best to look professional, but from the other side of the security glass, appeared like stunned fish circling a fishbowl when hungry cats approach. In a time of crisis greatness shine, but clearly there was none of that nor professionalism to display in those premises. The security guards were instructed to remove us. That didn’t happen. They were then instructed to stop photo taking. No luck again. ISS made a few panicked offers to Ibrahim and the other homeless refugees. When they refused in frustration the next action was predictably pathetic.

What do agents of social control do when biscuit rations and empty promises fail? We triggered this reaction often enough at UNHCR to expect ISS to call Hong Kong’s finest. Shortly afterwards, two, four, six, eight police officers entered the office with that familiar walkie-talkie chatter. Since crimes weren’t committed, the police could only attempt their best mediation technics for such an intractable problem, appreciating refugees depended entirely on ISS service or lack thereof. Everyone clashed against ISS’ rigid intransigence. Those dazed rabbits were dancing to an uncomfortable music they were unfamiliar with. They were out of their depth. They had been abandoned by Director Miss Panares, who was reported recently been discharged from hospital with high blood pressure. Vision First wishes her a speedy recovery to deal with upcoming actions that are sure to test her lateral thinking as much as her executive decision: is it worth managing a cruel program that causes refugees more harm than good?

The naivety and confusion of ISS was apparent when they asked the police to delete our photos and remove the journalists, an action that infuriated the reporters who sternly reminded ISS of freedom of press. ISS displayed an intransigence only matched by their negligence. They refused several reasonable requests to put promises in writing and couldn’t move beyond offering guesthouses while longterm dwellings were secured. Clearly they were instructed to sign nothing that would guarantee an undertaking to do the job they are paid for. At 9pm the homeless refugees broke the stand-off for the sake of the tired kids. They weren’t surprised that ISS refused to sign any guarantee their demands would be met in the near future. Even a police officer said, “It’s very difficult to find rooms. I have tried for a month to get the right flat and prices are so high!”

Exactly the point. If ISS salaries of 15,000$ to 25,000$ make it hard for them to find decent homes, what chance  do refugees have on a 1200$ budget and 15 months jails for working illegally? Something is alarmingly wrong with ISS housing policy and the cruelty it perpetuates. Its details will be revealed next Monday in the Legislative Council. Ahead of the big day, we suggest Miss Panares take a crash course in relaxing techniques to avoid hyperventilating at the sight of a disgruntled ISS clients filling the meeting room, galleries, lobbies and waiting for her outside Legco. The storm clouds are gathering and they might just blow away a whole lot of incompetence this time.

The Wall Street Journal: A look at the lives of Hong Kong’s asylum seekers

am730 on refugee slums in Hong Kong

The media interest on the Ping Che slums intensifies as concerned citizens query whether International Social Services (ISS) followed guidelines and abided by the law in authorizing the disbursement of government funds for these refugee slums. South China Morning Post have also uploaded the AFP video - now available here – that has been uploaded on over 30 websites worldwide. On Wednesday Vision First director Robert Tibbo visited the Ping Che slums and his comments are reported below in view of his considerable legal expertise:

Having seen the shacks in this compound, it is clear that the conditions are unacceptable. Human beings, in particular the asylum seekers, should not be living in these conditions. I question whether any of these residential premises are permissible in this area, whether this is zoned for residential living. It is clear that the asylum seekers have no choice about the extremely unhygienic conditions in which they live, including having toilets in their kitchens.

There are structures in Ping Che that clearly appear to be unsafe and dangerous. It is hard to believe that ISS and the Social Welfare Department have previously come down here and approved these living conditions. I have serious doubts that they ever came down here to approve these appalling living conditions. I would be interested to see the land title documents for these addresses and whether building permits for these residential living units even exist. I am curious as to who did the electrical work and whether the electrical work open wiring was installed by licensed electricians. Clearly this living environment for the asylum seekers comes as a great shock as Hong Kong is one of the world’s richest cities.

The Security Bureau and ISS have taken up responsibilities for the government in distributing aid, the Social Welfare Department oversee the living conditions for asylum seekers in the Ping Che area. These organizations, in my view, stand in a position of trust towards the asylum seekers, a position that I would describe as a fiduciary position. Looking at these terrible living conditions, I have my doubts about whether the government, Social Welfare Department and ISS have carried out their fiduciary duties towards asylum seekers.

This week TVB invited ISS director Ms. Panares to Ping Che for an interview, assuming she is proud of her housing program and willing to accompany journalists on an inspection. They were mistaken. Ms. Panares declined. She insisted on an interview in the comfort of her Mongkok office and offered the baffling excuse that, “Ping Che is overexposed!”

It is important to note that at 930am the day after TVB Pearl exposed the slums on the evening news (20 June 2013, World Refugee Day), Ms. Panares and a delegation of ISS officers pounded on that compound’s metal door unannounced. The sleeping refugees were shocked to open the door and see a dozen dignitaries had been dragged out of beds on a damage control mission.

For the first time ISS suggested refugees pair up to secure village rooms for which ISS would pay deposits and advance rent. It is also reported that ISS offered, “Whatever you need, refrigerators, stoves and gas cylinders … just make a request and we will give it to you.” The refugees were surprised by this sudden thoughtful attention after being ignored, cheated and discriminated against for years. As one witty Bangladeshi observed, “ISS treated us like VIPs … Very Inhuman Persons!”

There are reasons to doubt that humanitarianism is ISS’ core motivation at this stage. Vision First is of the opinion that ISS agreements in the slums and the landlords’ contracts and electricity demand notices, having contained incorrect information, might constitute evidence of offenses falling under the Theft Ordinance (sections 14-19).

In particular, we query whether these documents might evince: 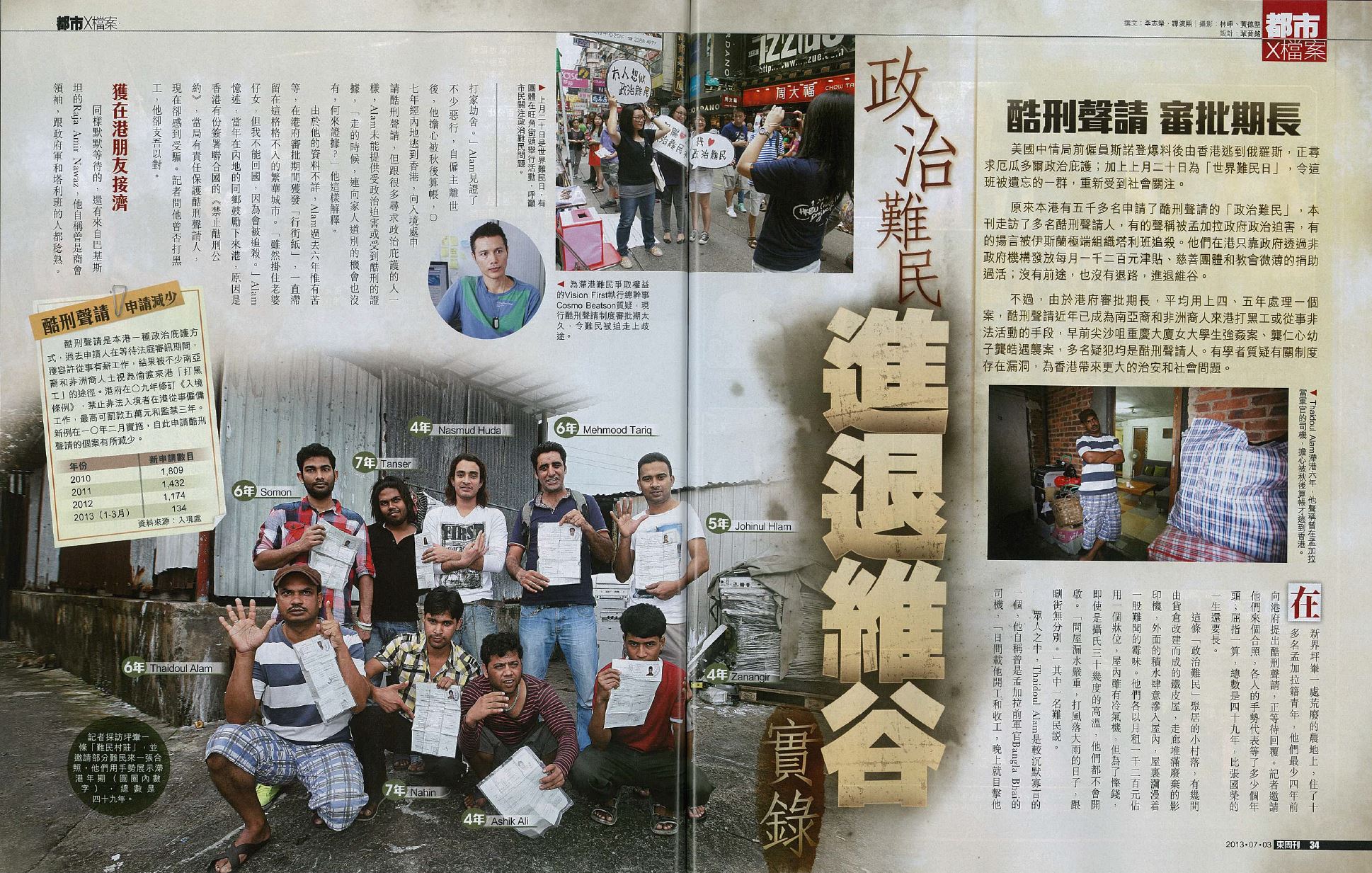 You either rob or you find a job. He took up employment, and was arrested for it.