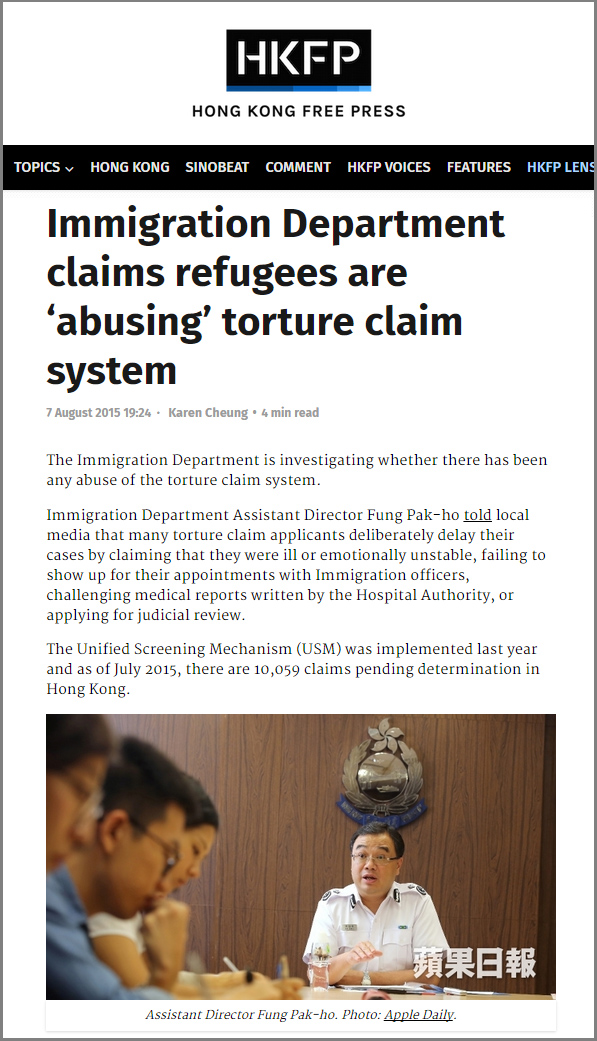 Hello, call me Outsider because I sought asylum in Hong Kong three years ago.

Recently there have been some sinister changes in the description of asylum seekers by the Government. One of the most sophisticated is turning the table on refugees by branding everyone an “illegal immigrant”. This wrong-minded propaganda does nothing to resolve the underlying issues. How many meetings were held? How much time and money were spent to come up with this brilliant idea?

Let’s look up the definition of “immigrant” (not illegal because refugees in HK have Immigration papers): a person who comes to live permanently in a foreign country. This definition has nothing to do with refugees. To label a group of people the first step should be getting to know them and understand their identity, narrative and objectives. One should understand who they are, not how we perceive them (prejudice), or how society treats them (discrimination). I suspect that Government is labeling refugees with the malicious aim of fueling public resentment and hostility.

Take my experience as an example. When I fled my country, where I was an established professional by the way, I was not dreaming of living in another country, particularly not Hong Kong. I cannot speak Chinese and I don’t practice kung fu, which is what this city was famous for where I grew up. Put simply, my objective was to save my life. I was arrested when leaving Hong Kong, not entering the city. I had no intention of staying, but have been stuck for three years already against my will.

Labelling refugees is aimed at residents, as it hardly affects who refugees are and how we evaluate the hostility we experience. I prefer to call myself a “runner for life” as I ran to save my life. No doubt you would have done the same! You can also call me an “outsider” as Hong Kong isolate me and makes me feel unwelcome. The Government does considers my needs, nor permits me to work to make a living.

Refugees most of all hate labels that are lies. I for one suspect that the Government is attempting to cast a negative name on refugees to stoke recrimination and hatred against our community, because they know that in truth it is the government policies that are to blame for the asylum mess in Hong Kong.

Some simple economic considerations might help to illustrate this problem:

There are about 10,000 refugees in Hong Kong who waste an average of 7 years to receive a (negative) decision on their asylum claim. Each refugee cost at least $3000 a month for rent and food, not including the cost of administration, lawyers, social workers, policing and detention. The total welfare amount alone is $2,500,000,000. Considering an average monthly salary of $7500, it would pay for 28,000 years of salaries!

I am outraged at the years and lives destroyed by the asylum process. How many years, and the most productive ones for that matter, does Immigration steal from refugees in the prime of their life? It is more than stealing because something stolen can be returned. Immigration is murdering 7 precious years that we can never get back. It is a priceless loss for persons in their twenties and forties who will never get their productive years back! Rejected after seven years of stress and pressure, nobody is the same person … people are lost, mentally broken, some even go crazy!

With the asylum process taking an average of 7 years, the above 10,000 refugees are expected to waste 70,000 years in Hong Kong, or the equivalent of about 1000 lifetimes. This is a tragedy and it doesn’t make sense to me. The result is that the current asylum process puts to waste 70,000 productive years (not young or old) and 2.5 billion dollars without accountability or consequence.

It is clear what Hong Kong Government has accomplished with 70,000 man-years and 2.5 billion dollars – nothing! What could the authorities do differently? WHAT WOULD YOU DO? How would you leverage these resources while finding a fair solution to the refugee dilemma? As Hong Kong takes great pride in its economic achievements, is it really impossible to productively deploy such manpower and capital?

It would have added insight to include some background information, such as an asylum policy that criminalizes claimants who are not granted economic rights to make an honest living — while trapped by a welfare assistance that is insufficient. Consequently those pushing drugs are not necessarily economic migrants, but may also include refugees who made the calculation that it is better (and more profitable) to serve 3-4 months in prison for selling drugs, than 15-22 months for working illegally. As no official statistics are available it is actually difficult to say how many people are involved, but the number appears to be on the rise.

Vision First understands that since international trade is down, due to the high dollar, many refugees have considered illicit activities to survive in a hostile environment that punishes harshly those who engage in ‘legal work’. The fundamental issues have not changed: refugees cannot work and are stranded in Hong Kong for many years with limited assistance. They strategize accordingly. And obviously there are those who take advantage of their desperate precariousness to hire them for criminal activities. This article fails to mention the syndicate bosses who exploit some of the most marginalized and destitute people in society left with no legal way forward.

Finally, refugees constrained by protracted destitution are not immune from the lure of crime, especially if they feels that society and the rule of law have turned against them. And we will all pay the price for it, directly or indirectly. We should seriously question the notion that we can advance ourselves by leaving the disadvantaged behind or by trampling on their human rights. 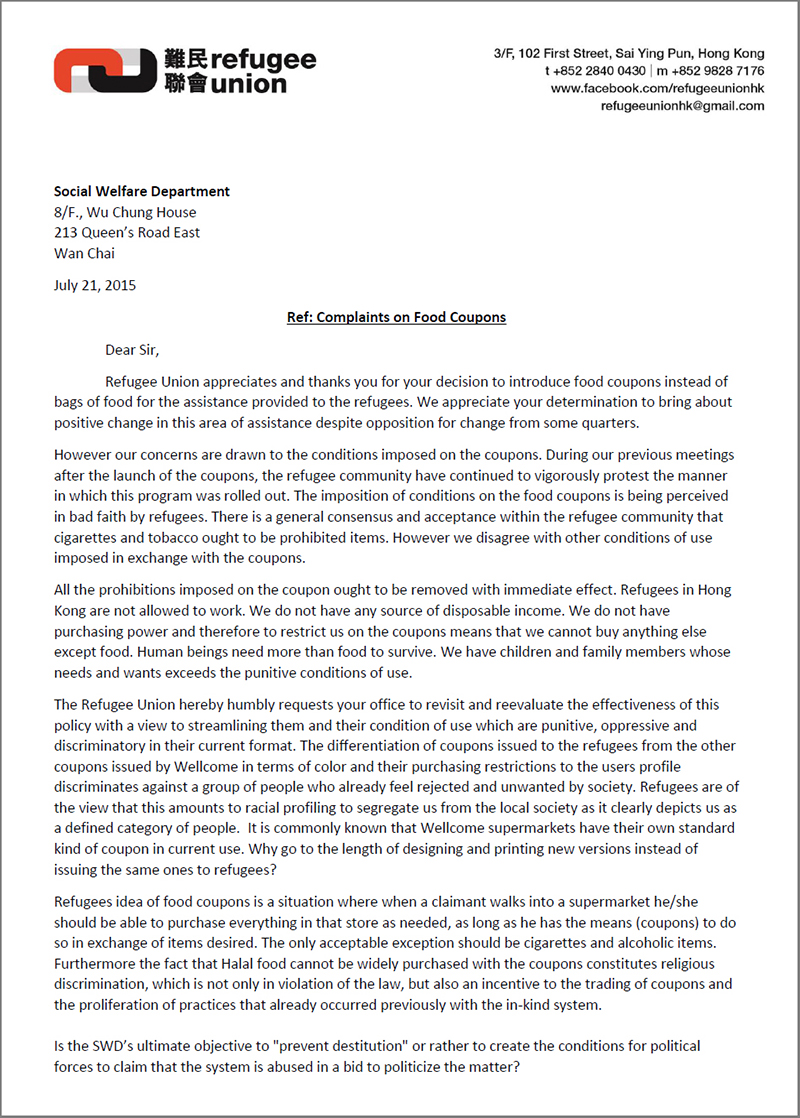