The other side of the domestic work-refugee nexus

There are two sides to the issue of foreign domestic workers falling pregnant and losing their jobs – one is local, the other overseas. On the home front, TVB recently reported on the plight of thousands of maids whose lives were disrupted by pregnancies that are not formulated into policies and, in some cases, are not respected by employers as workers’ rights.

There are some 320,000 foreign domestic helpers (FDH) who account for around 3 per cent of the Hong Kong population. The infamous case of Erwiana symbolised the risks of serious human and labour rights violation by devious employers who might treat maids as disposable slaves. By seemingly failing to enforce the law, the government is not making their plight easier.

Maternity protection is clearly a major concern for hundreds of thousands of female workers in prime child-bearing age. The Employment Ordinance is crystal clear: maids are eligible to 10 weeks’ paid maternity leave (after 40 weeks employment) and the dismissal of a pregnant worker is an offense. An employer who contravenes the provision is liable to prosecution and a fine of HK$ 100,000. But how many employers were successfully prosecuted?

The grim side of this story is that hundreds of pregnant maids seek asylum after being unjustly terminated, or falling out of employment The fear of departing Hong Kong should not be oversimplified. The fear matrix may include complex factors: income loss, illegal work, local partners, prior relationships, support networks, loan sharks, debt bondage, ostracization, religious prohibitions, family shame, customary expectations, racial discrimination and the threat of honour killing.

Contrary to popular belief, any person who overstays in Hong Kong may lodge a protection claim which ought to be approached on the premise that it is genuine until it is proven that it cannot be substantiated. Consequently no adverse inferences may be drawn against ex-maids (pregnant or not) since they might have legitimate claims and several have been recognized as refugees.

Our blog “Understanding the domestic work-refugee nexus” explained that maids are predictably drawn into the asylum sphere for several reasons. A crucial one is that they are not just workers, but are also women who endeavour to foster human relations in a society that diminishes their social worth and dehumanizes their femininity. It is natural that maids and refugees date because both communities are shunned by residents and are often deemed lesser human beings.

The distribution of thousands of boxes of Pampers (and condoms) at Vision First testifies to an escalating problem that the authorities are advised not to underestimate. The big picture is as predictable as it is problematic. Short of sterilization, Immigration has no way of curbing the sexual activity of 320,000 mostly female maids and 10,000 mostly male refugees who find comfort in each other’s arms. Is it surprising that these two communities meet and mingle?

Under the existing scheme, the government offers pregnant maids few choices but to return home under impoverished, unsafe circumstances, or seek asylum. Refugee fathers have little to offer their new families without work rights and adequate welfare assistance. The immigration status of the children follows that of the parents: if neither is a permanent resident, then the children are overstayers under the family’s or a parent’s claim.

The fear matrix becomes crucial. Once the asylum process is concluded, mothers ponder the pros and cons of returning home: Is the fear greater than the prospect of an immiserated existence? Is the danger of returning substantial, or could alternatives be explored given time? Nobody is under any illusion about the zero percent acceptance rate, but the variables are many and timing is key, because it is easier to return with a toddler than an infant. It would be advisable to allow mothers to work again rather than compel them to seek asylum as the only available pathway.

The government is concerned about the escalating cost (640 million HKD according to this report) of the asylum scheme. Priority should thus be given to formulating viable alternatives. Hong Kong society cannot enjoy the privilege of (underpaid) domestic workers without making provisions for natural consequences. We should not turn a blind eye to thousands of women whose rights are violated by policies that fail to envision maternity and its ramifications locally and overseas. Again Hong Kong is attempting to have its cake and eat it.

A tearful farewell to Lucky

“I knew Lucky from Sri Lanka. We played football together. He was an excellent player. Then our lives were destroyed by the war. After we fled to Hong Kong I cannot say that it was easy for him. Lucky was friends with everyone, but smiling doesn’t mean you don’t have HELL inside.” This poignant remark from an old friend captured the spirit of the funeral service for refugee Sivarajah Sivatharan.

Fu Shan Public Mortuary is nestled in the green hills of Tai Wai, a peaceful location grounded in nature and connected to eternity though the smoke that rises unworried to the sky every fifteen minutes. Almost a hundred friends joined Lucky’s brother Sivaharan, who flew in from the United Kingdom, to bid a sorrowful farewell to a refugee who found misery, not protection in our inhospitable city.

The ceremony was attended by NGO workers and priests who work closely with the community. The general discussion was that life remained miserable; those stranded here for over a decade lamented the lack of progress. A veteran refugee remarked, “Nothing has changed. It is years that I am waiting and nothing good happens. When I arrived my son was one year old. Now he is 12 and he refuses to talk to me on Skype because he doesn’t know me. It breaks my heart!”

The Srilankan refugee community is quietly stoic and confidently brave. Everyone saw death in the face and overcame unspeakable horrors before seeking sanctuary in Hong Kong. The government understands it and the majority of substantiated torture claimants are Eelam Tamil, a minority ethnic group that suffered tremendously through a 26-year civil war and its fearful repercussions.

Lucky’s mourners questioned the circumstances and the responsible those who for years approved his home in a dangerous tin shed: the fixer who rented huts on property he did not own (Land Dept source); ISS-HK who failed to safeguard Lucky’s wellbeing and entered problematic addresses in service agreements; SWD who turned a negligent blind eye to the slums until the fatality. The distraught grievers had nothing good to say about a welfare system that oppressed them.

The Refugee Union denounced those responsible in an earlier statement. “We condemn in the strongest terms possible the heinous act of allowing refugees live in squalid, hygienically unsafe and deadly trapping unauthorized structures … The death of our friend Lucky was as a result of impunity, negligence, malpractice and outright discrimination.” The Union is requesting a Corner’s Examination.

A Hindu priest presided over the cremation and guided Lucky’s composed brother through the rubrics of an ancient ceremony. Father Blaise subsequently intonated the Lord’s Prayer that was softly supplicated by mourners whose voices were drowned by sorrow. Finally, Sivaharan pressed a button and the coffin glided silently behind a purple curtain into consuming flames. Rest in Peace, Lucky!

RU prepares to bury a comrade

About a month ago two master students from Australia arrived in Hong Kong. Their mission was to study the life and circumstances of refugees in Hong Kong. “I want to find out how refugees and asylum seekers are treated here,” said one, “Refugees are my thesis for my doctoral study in criminology.”

Their journey started on a sour note after they sent a parcel to the Refugee Union. When it arrived, the Post Office issued a note advising to collect the parcel. The following morning at the Post Office a Refugee Union member produced his Identity Document to claim the parcel, but the clerk refused to accept his Recognizance Paper as a proof of Identity.

We were unable to claim a parcel at a Hong Kong Government office by producing a document issued by Hong Kong Government after our passport were confiscated! Back at our desk we emailed the sender and explained the predicaments. They thought it bizarre that refugees hold a document that is meant to prove identity, but is not freely accepted in Hong Kong.

The Recognizance Paper with its archaic, imposing A4-size never goes unnoticed. It is meant to embarrass and demean refugees as an undesirable and unwelcome lot discriminated by the denial of legal status, even when Immigration takes a decade to determine claims. The classification of the unwanted starts with their criminalization – overstayer, outlaw and convict!

Shouldn’t the Post Office be briefed on and instructed to accept Recognizance Papers? Today there are over 10,000 such documents in circulation and refugees might need to produce them at one of the 129 post offices, where ignorant officers look aghast at bearers, “What is that? I don’t know what this is?”

The students found this story hard to believe, “In Australia we do not treat refugees like that. They enjoy their rights as human beings and live with dignity as everybody else. It’s a big shame what you go through. It is even doubtful that these arrangements are beneficial to Hong Kong in the long-term.” 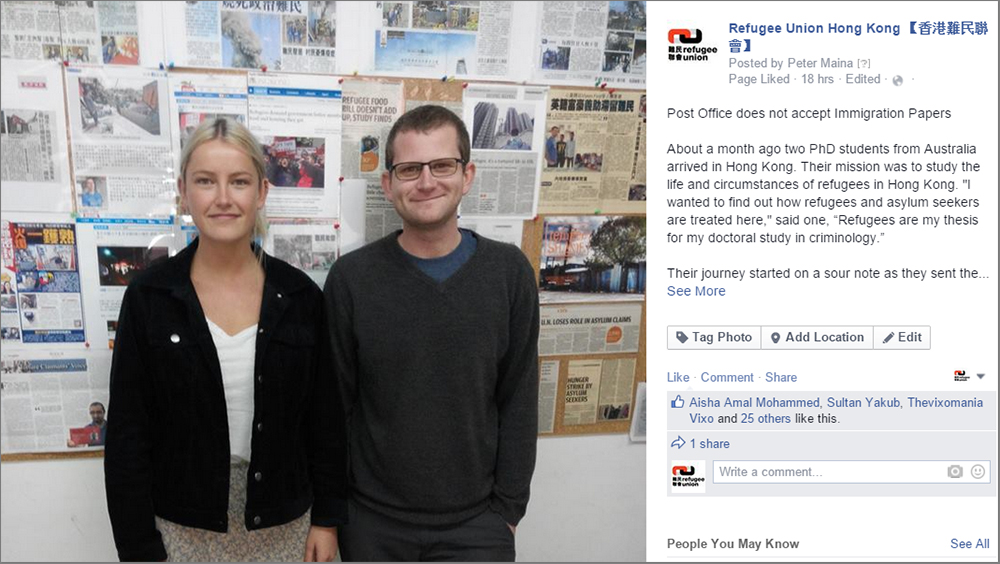 The Standard “Protesters pruned as crowds flock to gardens”

Update from the Refugee Union meeting