Hong Kong asylum system is in a shambles

The Unified Screening Mechanism may as well be said to have failed in keeping up with its promise of protection, remarked a senior lawyer at a Vision First meeting this month. He was of the opinion that the administration mismanaged the process to such an extent that fair-minded observers would not consider it a success, if not for rejecting 99.9% of asylum claims.

The big picture is alarming. USM was expected to finally process claimants, whose numbers hovered around 5000 for years. But in 2014 the number doubled to 10,000, with new claims lodged at more than 300 per month. This surge surprised the administration that expects a considerable rise in screening costs, welfare assistance and the publicly funded legal scheme.

The backlog of claims is expected to increase further as refugees becomes familiar with the “Right to life claim” (BOR 2) which requires that asylum bids be also assessed on grounds relating to Article 2 of the Hong Kong Bill of Rights Ordinance, which is binding on the Immigration Department.

From documentation acquired by Vision First and freely available on the LegCo website, it seems that rather than reviewing an asylum system, that seems to neither protect nor uphold refugee rights, the administration is considering fast-tracking screenings, affecting legal safeguards. However, placing departmental expediency and completion targets ahead of obligatory “high standards of fairness” will pave the way for extensive judicial reviews, warned the HKBA.

If the administration’s approach to screening and determination is cause for alarm, the welfare side is of little consolation. It should be pointed out that hundreds, if not thousands of claimants have been in limbo for years without adequate welfare or employment rights. Such unfair treatment inflicted unjustified hardship on already vulnerable persons who hoped to find sanctuary in Hong Kong.

Instead of protection, refugees experience rejection through countless difficulties that hamper their daily existence. It takes months to obtain assistance, during which time new arrivals are often left hungry and homeless, fending for themselves in the streets. “We signed the contract with ISS but cannot find a place for 3000$. Without a room ISS only provide dried food like biscuits, instant noodles and canned food!” lamented an African couple who has slept on a sofa-bed at Vision First for several weeks.

The mismanagement of food rations continues despite refugees vociferously protesting for more than a year. There might be a widening rift between the SWD and ISS-HK that exposes a communication problem, to put it gently, relating to millions of dollars in food allowances that failed to reach the plates of destitute and hungry refugees. “Where is the remaining money” questioned Cable TV.

The 69 refugee slums exposed by Vision First are emblematic of the faltering asylum system. As a matter of fairness and humanity, it is reasonable to expect that the slums be wound down gradually without mass evictions that cause preventable homelessness. To the contrary, the same indifference to the wellbeing of refugees manifested in the establishment of slums, is blatantly obvious in their abrupt closure without offering basic, functional and safe accommodation.

A distraught refugee recently made homeless exclaimed, “I waited seven years for Immigration to [determine] my case. Still no answer. Now I have no place to stay and nowhere I can rent for 1500$. Hong Kong wants all refugees to go away! If we could go to another country we would leave … but how?”

Translation of the Cable TV report on shrunken food assistance to refugees, aired on 9 March 2015.

There are 7,500 refugees and torture claimants in Hong Kong who receive government assistance through the International Social Service (ISS-HK). However, the food rations they collect every month are ‘shrunken’. We investigated how much the ‘shrinkage’ is and where the missing money goes.

These 2 bags are the 10-days food collection of Hassan. Hassan came from Bangladesh to Hong Kong ten years ago and he receives government assistance as a torture claimant. Every month he goes to one of ISS [appointed grocery shops] three times to collect his food allowance.

Currently the Social Welfare Department outsources the refugee welfare service to International Social Service (ISS-HK) who arrange the food packages for 7,500 refugees, but the food collected is found to be ‘shrunken’. So, how much is the food worth? Our reports took the food to the market to check the value. The retail price of these [two bags of] food is $308.50, or $90 less than the price official price of $400.

Our reporter followed Hassan for a month. At the beginning of every month he goes to ISS office to fill in forms or his preferred food. But the forms do not indicate the price and the case worker does not inform the price of the food items he selected. He doesn’t know if it worth $1,200 [as indicated in official government communication].

Our reporter took his food packages to check at market prices. The total price of his monthly food was $993.30, or $200 less than his $1200 food allowance. Also the weight of the food Hassan collected is less than what he selected in the forms. Our reporter also found that other refugees receive ‘shrunken’ food collections. One refugees’ two bags collection was worth $320.90 only, and another refugee’s collection was worth $324.90. Both were about 20% less than [the food allowance].

International Social Service pointed out that if the $1,200 food subsidy is not used up, it will be returned to the government. However, Social Welfare Department reported that between the years 2010 and 2012 it disbursed 320 million HKD to ISS-HK. After the contract finished, ISS-HK returned 6.4 million HKD to the government as a reimbursement of administrative fees.

So, where is the remaining money? Our reporter asked ISS-HK again and they said the remaining money will be used for new collections [in subsequent months] until it is used up. And about the ‘shrinkage’ of the food, ISS-HK said refugees can weigh it themselves and if it is less than the standard amount they can ask to receive more.

Social Welfare Department said they will monitor the service quality of ISS-HK and how public money is used. Recently they also decided to change from in-kind food assistance to a coupon system in the new tender.

i-Cable: Value of refugee food assistance does not add up 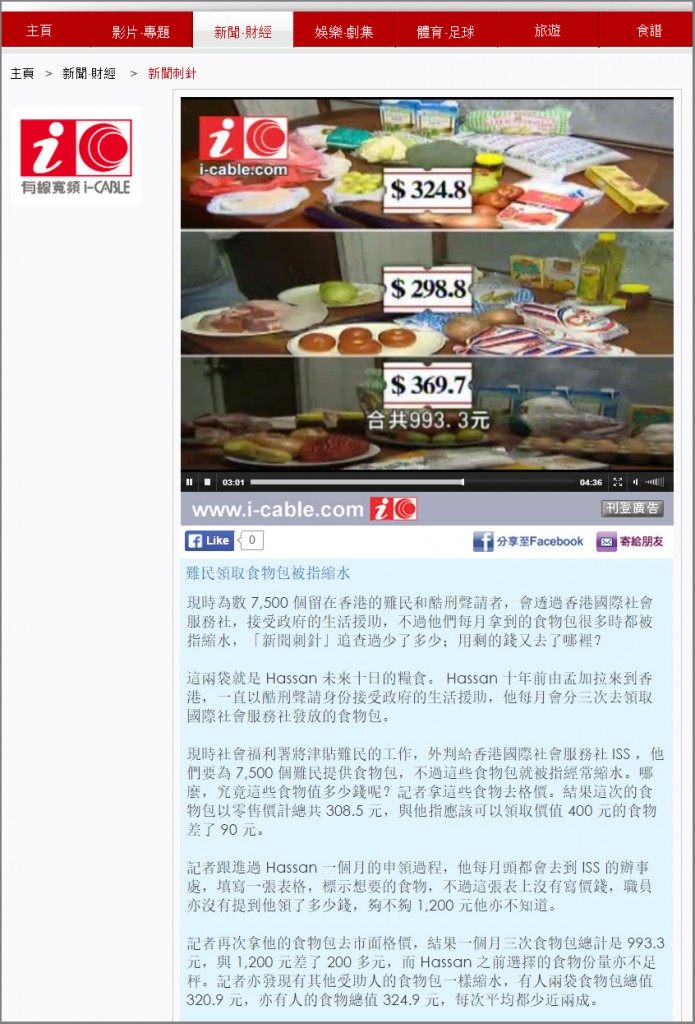 A South Asian women walked out of a supermarket without paying for several items worth less than 200$ in her recycling bag. Two shop attendants readily intercepted her outside and accused her of shoplifting. The police were called in to handle the matter and she was arrested. Several months later in a magistracy court, the 54 year old woman was convicted of theft and sentenced to 6 months jail.

The magistrate was convinced there was criminal intention (mens rea) by the plain facts that she had removed items from shelves, placed them in a bag and walked by cashiers without paying. CCTV recorded such actions without evidence of suspicious behaviour, such as acting furtively, glancing around before stealing, resisting interception and admitting guilt to be ‘given a second chance’.

On 29 January 2015 barrister Mark Sutherland, a non-executive director of Vision First, made submissions in favour of the appellant in the high court. He underlined the mental state of a woman who suffered persecution before seeking refuge in Hong Kong in 2004. Such traumatic experiences resulted in PTSD that worsened severely as she felt an outcast, immiserated and marginalized refugee for over a decade. The prohibition from working denied her a dignified life.

A report by clinical psychologist Dr. Parul Batra, also a non-executive director of Vision First, described the severe depression and mental disorder of a disoriented and confused lady disconnected from society who had never received any psychological support. The court heard that the appellant suffered from memory loss, flashbacks, trouble concentrating and ‘non-insane automatism’, i.e. performing acts without the conscious control of the mind.

In addition, while shopping the lady had received a distressing phone call informing her that her husband, also a refugee in Hong Kong, had suffered an accident and had been admitted to hospital. More doubts where raised about her criminal intention by the fact that when she was stopped she calmly stated, “I forgot to pay” without resistance, justification or other behaviour typical of thefts.

Mr. Sutherland objected to the lower court magistrate having drawn adverse inferences from the woman having entered HK as a domestic helper before seeking asylum. The court was reminded that every asylum seeker must either enter illegally or overstay a visa before raising a claim. The defense reiterated that while asylum claims are pending assessment, and until all legal remedies are fully exhausted, nobody is allowed to make any comments on why and how claimants seek asylum.

In the high court, the Honourable Judge Tallentire confirmed the conviction, but reduced the previous sentence from six to three months. It is regrettable that lower court magistrates put little weight on psychological reports and show no sympathy for asylum seekers painted with one brush, often meting out decontextualized sentences as per guidelines that only dehumanize offenders. Culpability aside, a six month sentence recalls the banning to Australia of those guilty of stealing bread in 19th century England. If only such custom were maintained today!