USM is a mechanism of border control not refugee protection

In view of the very low acceptance rate of the Unified Screening Mechanism (USM), perhaps it is necessary to rethink the purpose of this mechanism. Vision First suggests that at the Legislative Council’s Panel on Security on 7 July 2015, lawmakers re-examine the implementation of the USM and its usefulness to taxpayer who this year will foot a 644 million dollar bill to operate what refugees dubbed a ‘fake’ scheme.

Given that the Government bluntly refuses to grant asylum and brands refugees as illegal immigrants, what rational and objectives have supported Hong Kong’s asylum process since 1992? The city’s masterminds are too savvy to operate exclusively on the premise of moral obligations towards the international refugee problem, as states are rarely motivated by moral responsibility alone.

The USM seems to be characterized by its migration control function, rather than the Government’s international duty to safeguard persecuted foreigners. Like its predecessors, the USM does not offer sanctuary. Rather it exerts state power to confine, control and ultimately expel an unwanted migrant population.

Government propaganda successfully homogenized refugees with economic migrants, illegal immigrants and travelling outcasts stigmatized as a risk to Hong Kong’s security and affluence. Within this self-serving masterplan, the USM is deployed as a MECHANISM OF BORDER CONTROL to relentlessly banish asylum seekers, stateless persons, failed (often pregnant) domestic workers, economic migrants and other misfits perceived as a nuisance after a few years of exploitation.

The Government is less than sincere about even granting non-refoulement protection, or else considerably more than 28 refugees would have been identified and assisted since 1992. Such negligible results indicate that the asylum process has routinely performed the function of rejecting undesirable border-crossers, rather than protecting vulnerable refugees.

Although it is unlikely that pro-establishment lawmakers will question the status quo, and it is improbable that challenges from the opposition will be anything more than noted, Vision First presents a set of questions of public interest for the upcoming Legislative Council’s Panel on Security meeting: 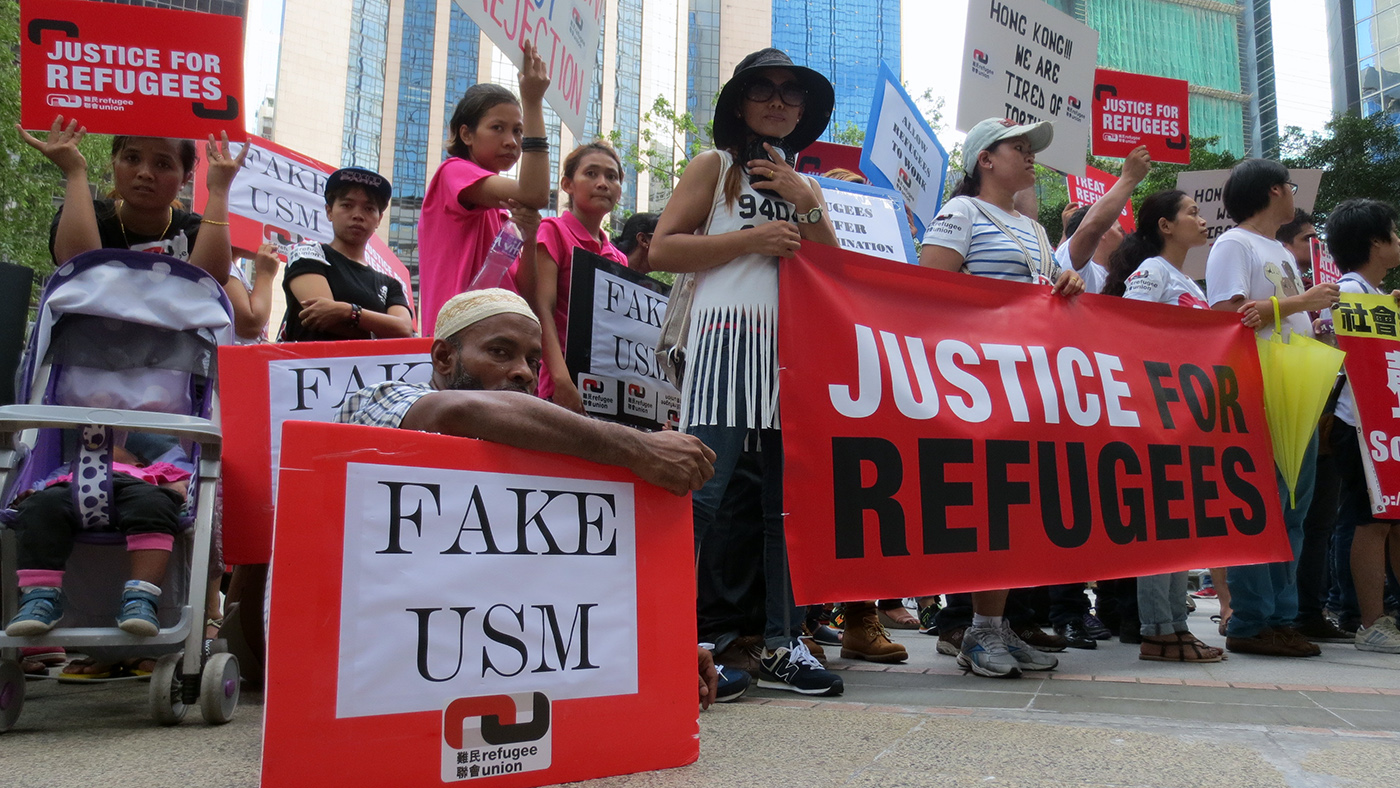 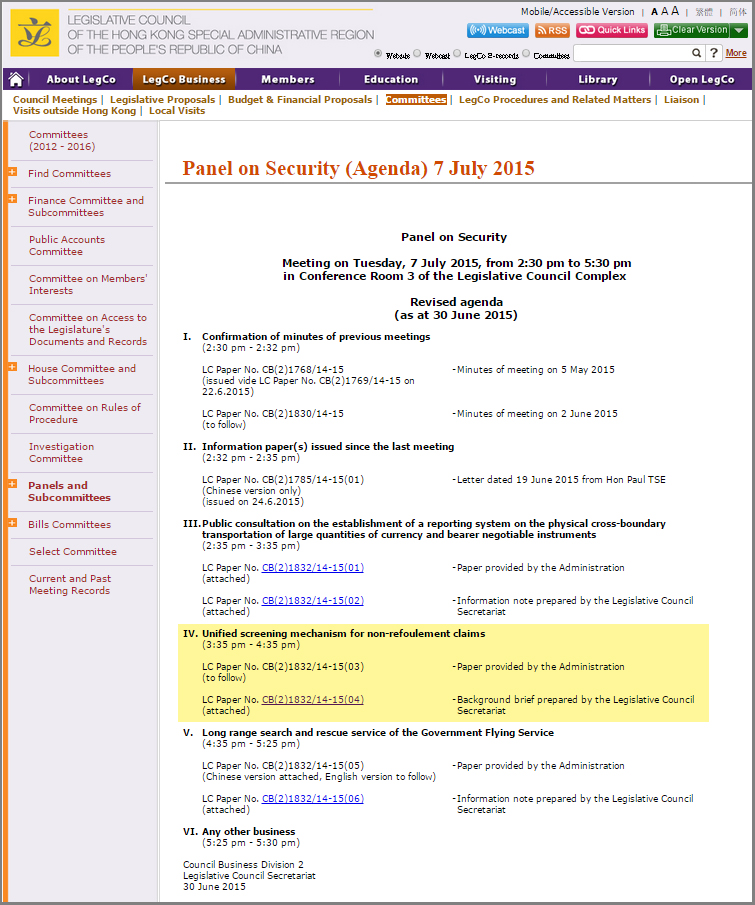 The Unified Screening Mechanism (USM) was introduced on 3 March 2014 “to determine claims for non-refoulement protection against expulsion, return or extradition from Hong Kong to another country on applicable grounds including risks of torture … cruel, inhuman or degrading treatment or punishment … and persecution”. It replaced a much maligned two-track system that combined Immigration and UNHCR, which was found wanting by the courts.

Although the development might appear as an improvement to most observers, refugees’ dissatisfaction with USM is growing. An effective zero percent acceptance rate persists; one which saw just 28 successful cases out of 20,000 application since the UN Convention against Torture was extended to Hong Kong in 1992 – or exactly 0.14%. Refugees know that statistics do matter.

As Hong Kong did not accede to the UN Refugee Convention, direct comparisons with country states are unsatisfactory. Nevertheless, success rates in developed countries average 20 to 40% yearly, with Australia at 48% and Canada at 50% despite stricter policies “discouraging bogus asylum seekers and sending them home more quickly”. Is Hong Kong intentionally an asylum black hole?

Refugees seeking sanctuary in Asia’s World City struggle to reconcile the offer of protection with the effective rejection of 99.86% of claims. As a refugee stranded here for 10 years put it, “What’s the point of USM? It’s like torture screening before: nobody wins their case. My torture claim was rejected but I cannot go to another place because my passport expired. Hong Kong does not accept me so I am stateless. Refugees are refused and left to rot in poverty.”

The thin hope sustaining refugees in limbo sadly borders on delusion. On the one hand, they know their asylum bid will fail, but on the other, they cannot give up, because “hope is all that is left.” In the face of overwhelming odds, refugees keep waiting for a positive outcome supported more by faith, than a critical understanding of a system ostensibly intended to guarantee rejection.

In the words of a refugee mother, “It’s a fake system! It looks prim and proper with thick documents and reams of files, with duty lawyers and fancy titles, but the result is always the same. ‘Your case is not substantiated’, says Immigration. You are refused. They tell you to bring your suitcase to CIC (detention) for removal. They want to send everyone back. Perhaps my case was not strong, but how about the other 2000 they will close this year?”

The Government is blunt and makes no secret of an overt policy, “Non-refoulement claims lodged under the USM are not asylum claims … The Government maintains a firm policy of not granting asylum to or determining the refugee status of anyone … Our policy objective is to screen non-refoulement claims effectively and … to remove rejected claimants from Hong Kong as soon as possible.”

The message is clear – Hong Kong does not grant asylum. USM could be viewed as an arrangement to suspend the repatriation of claimants until refused or, if substantiated, until “the risk giving rise to the claim has ceased to exist (and …) ImmD will consider revoking his non-refoulement protection and removing him from Hong Kong.” According to such a policy, successful USM claimants are tolerated until conditions in the risk state become safe to repatriate. The circle is then closed by an agreement with UNHCR to resettle successful persecution claimants.

While refugees lament that the USM is fake, there is however consistency between the words spoken and the actions taken by the authorities. Branded collectively as illegal immigrants, refugees are treated as delinquents at worst, or a nuisance at best, to be removed as expeditiously as possible by the Immigration Department that “handles every step of the screening procedures in accordance with the high standards of fairness required by law”.

Perhaps the USM is not fake. Perhaps it achieves the results envisioned by its architects, whose irritation might be reflected by an appeal magistrate who reportedly castigated a refugee stranded since 2004: “Why you come to Hong Kong? You asylum seekers are a problem for us … We are giving you everything … Do you want a 5 star hotel?” The judge then abruptly rose and adjourned the case. Will this refugee have to wait another decade before receiving protection?

Why haven’t the authorities closed down all the refugee slums?

In the New Territories, close to the MTR Light Rail station of Nai Wai, the stench of excrement emanating from a pit toilet in a crowded refugee slum we recently visited was overwhelming. A seasoned reported we accompanied was shocked by the dreadful conditions and gagged at the offensive odor. With extensive experience in India, he noted, “600 million Indians defecate in the open, but this is Hong Kong, an international financial centre, and these shelters are approved by a government contractor and rent is paid with public money, right?”

At times, the torrential rain splashed through the ventilation gaps in an unsound roof hazardously weighed down by discarded material, including several rotting mattresses. A spokesman for the 15 refugees settled in the abandoned pigsty lamented the atrocious conditions, “Where else can we live? 1500$ (in rent assistance) is not enough. My bed is wet from the rain. Last night I slept on a chair with an umbrella. We don’t have toilet … there is a dirty hole in the ground … How people say we come to Hong Kong for a better life?”

The safety, hygiene and sewerage in this slum are manifestly horrendous and a shock to the conscience of any observant visitor. Since Vision First exposed this slum in December 2013, it featured in dozens of media reports, both local and international, but the authorities have failed to close it down and relocate endangered refugees to basic, safe and clean housing.

Vision First queries whether this dump complies with the SWD Invitation to Tender that requires, “The Contractor shall ensure that Service Users … are provided with accommodation, identified … in the private sector (including electricity, water, gas supply and other basic utilities). The Contractor shall … monitor the living condition … conducting spot checks and home visits … to ensure the safety and hygiene condition of the accommodation … and shall handle emergency relocation …”

Several of the 69 refugee slums exposed by Vision First were closed in 2015. In those cases – for reasons that haven’t been made public – caseworkers informed the affected refugees that rent payments would cease from one month to another, thus abruptly terminating questionable arrangements that had previously thrived unchallenged for years. However, interestingly enough, it was not always the worst slums that closed down first. Rather, acceptable or unacceptable documentation might determine the closure or approval of refugee slums.

What leads a supposedly civilized society to abandon human beings in extreme degradation? Academics explain the marginalization and precarization of troublesome and unwanted communities. Scholars articulate the stigmatization and criminalization by the state and other dominant forces of undeserving social rejects for containment and control purposes. A USM appeal judge (name withheld) went as far as harangued a powerless refugee, “Asylum seekers are a problem for Hong Kong. Why you come here? What do you expect, a five star treatment?”

The honourable judge might agree that defecating in open sewers should not comply with acceptable standards. The refugee slums are an affront to the decency of every citizens of Hong Kong. These compounds are the shameful legacy of a failed ‘humanitarian assistance’ that a slum-dwelling refugee rightly described as “treating us like animals.”

Do these appalling living conditions and distressing human suffering evince an apparent limit to Vision First’s advocacy against refugee slums subvented by the Social Welfare Department? If so, should other sections of society also step in? It might be argued that anyone who has direct or indirect knowledge of this problem shoulders a fraction of the blame for its continuation.

Ultimately, beyond the recrimination, responsibility and social-legal implication are the men, women and children who suffer deplorable living conditions in the shadow of expensive rural villas. Nowhere else in Hong Kong does the rich-poor divide make a starker contrast! Some witnesses find it hard to sleep at night knowing that fellow human beings are crushed by extreme destitution and society is not doing anything about it. 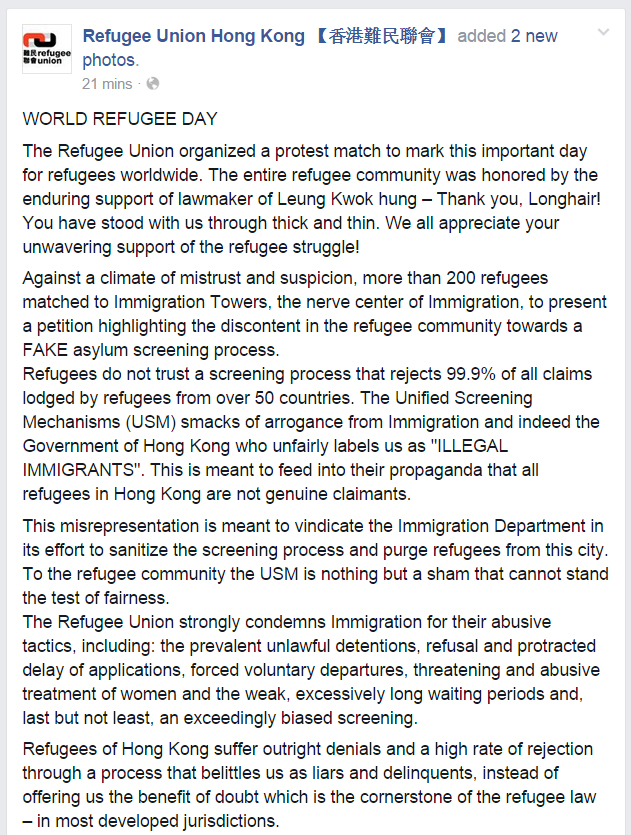