Over the past week the local media reported that 11 Bangladeshi refugees were arrested and charged by the Independent Commission Against Corruption (ICAC) for allegedly defrauding the International Social Service (ISSHK) of hundreds of thousands of dollars in rent assistance over several years. Vision First cannot but question this approach in view of the following.

The ISSHK, Fixers and Landlords Consortium

From March 2013 Vision First systematically exposed hazardous slums in which hundreds of vulnerable asylum seekers were knowingly and intentionally settled by ISSHK with government funds credited as rent assistance, not into the bank accounts of the asylum seekers (they do not have any), but into the accounts of unscrupulous fixers and purported landlords who exploited refugee tenants.

Gradually a disturbing picture emerged of at least 69 (sixty-nine) ghettos established by Hong Kong Chinese landlords in remote rural farmland and some located in dilapidated animal farms. These were distant from urban areas and hard to locate without particular knowledge.

Among these ghettos, 64 (sixty-four) slums were situated in the geographical constituency of “New Territories West” represented by lawmaker and former head of the DAB party Tam Yiu-chung, who was also appointed a director of the board of ISSHK in 1999, a position he held until 2015. The remaining 5 (five) slums were allegedly supported by a fixer named Jane Chan, who operated an agency for foreign domestic helpers in Yuen Long, also within Tam Yiu Chung’s DAB controlled New Territories West.

It appeared after attentive investigation that these refugees were exploited for financial gain by fixers who distributed and filled in ISSHK paperwork, by alleged landlords who provided false and/or misleading information, and by genuine landlords who rented out animal farms and agricultural land for residential use to unsuspecting and destitute refugees. Finally, ISSHK case-workers inspected and approved these unauthorized structures to intentionally settle the aforesaid homeless refugees for reasons that must be explained.

It is highlighted that Mrs. Regina Leung, the wife of the Chief Executive of Hong Kong, Mr. C.Y. Leung, has at all material times and at present day been the Patron of ISSHK, and a participant with the ISSHK board of directors. To this effect, Vision First reported about a protest by the Refugee Union outside Government House in March 2014 which failed to draw the sympathy and support of Mrs. Regina Leung. The Vision First blog of 14 March 2014 is available here.

What emerges is the picture and reality of an Orwellian “Animal Farm” environment controlled by and led by the consortium of ISSHK, real estate fixers and true/fake landlords.

The “Animal Farm” for Refugees

Vision First campaigned against the “Refugee Slums of Hong Kong” primarily because they were illegal and hazardous structures that endangered the lives of vulnerable refugees who received insufficient rent assistance to secure proper accommodation. In fact, a Sri Lankan refugee died in a slum blaze in February 2015 and exploding gas cylinders razed another slum a month later. Considerable danger from fire, explosion, flooding, collapse, electrocution and disease was always palpable upon our inspections.

Few visitors to the slums were in any doubt that the settling of homeless refugees in such dangerous huts was an egregious act by whoever was responsible for a scheme that started in 2006 and ended in 2016 when the Lands Department clamped down these illegal practices. Presumably there were also policy changes at ISSHK that quietly discontinued the questionable arrangements that generated the slums in the first place and sustained them for a decade beyond the public eye.

In July 2016, after three years of investigation, the Hong Kong Government decided to arrest and charge 11 (eleven) destitute Bangladeshi refugees who the ICAC allege of masterminding this impressive and widespread criminal enterprise that established and supported several slums in the fields of Ping Che, Fanling between 2010 and 2016.

Vision First has learnt that none of the fixers or purported landlords involved have been taken to court, while several staff of ISSHK are collaborating as prosecution witnesses. Not one person from ISSHK has yet to be prosecuted. Only the weakest and most vulnerable asylum seekers are being targeted and prosecuted by law enforcement that seems determined to fry some small fish.

It begs the question – Are these politically motivated prosecutions? The answer may well be found in the pages of George Orwell’s book - “Some people are more equal than others“.

The 11 (eleven) defendants were charged with fraud under the Theft Ordinance. They are accused of fraudulently misrepresenting residential addresses in Tenancy Agreements and housing forms allegedly to defraud ISSHK of rental assistance to live in some of the most disgusting, degrading and dangerous slums to house Hong Kong refugees in the past two decades.

All the defendants are illiterate, except for Bengali. They are generally unfamiliar with ISSHK housing procedures and the intricacy of relevant logistical and legal matters. A host of troubling questions emerge about those persons in control of the 69 (sixty-nine) slums and their complex documentary and financial transactions with ISSHK. The asylum seekers were ultimately subjected to living in inhumane, humiliating and degrading premises with no financial gain for many years. Why?

It is bizarre that the ICAC alleges that illiterate, destitute, and marginalized refugees allegedly masterminded a complex, pervasive fraud that credited tens of millions of tax dollars into the accounts of fixers, middlemen and purported landlords based on ISSHK having knowingly and intentionally sanctioning animal sheds for human habitation hidden far away from the public eye.

ISSHK – A Government Agent of the Social Welfare Department

It is highlighted that ISSHK is a Hong Kong Government contractor under the Social Welfare Department (SWD). In its capacity to provide services to non-refoulement claimants, ISSHK does not act in a role of an NGO that receives donations from the public. It is known that ISSHK does provide services as an NGO to other persons, but not to asylum seekers and refugees under its contract with SWD since 2006.

Assisted by Vision First on a humanitarian basis and represented pro bono by Barrister Mr. Robert Tibbo (who acted for American whistleblower Mr Edward Snowden in Hong Kong) the 11 (eleven) defendants, or the “Bengali Eleven”, have pleaded not guilty to the fraud charges brought against them by the ICAC. They will fight robustly against this overt political persecution and will identify the true offenders. 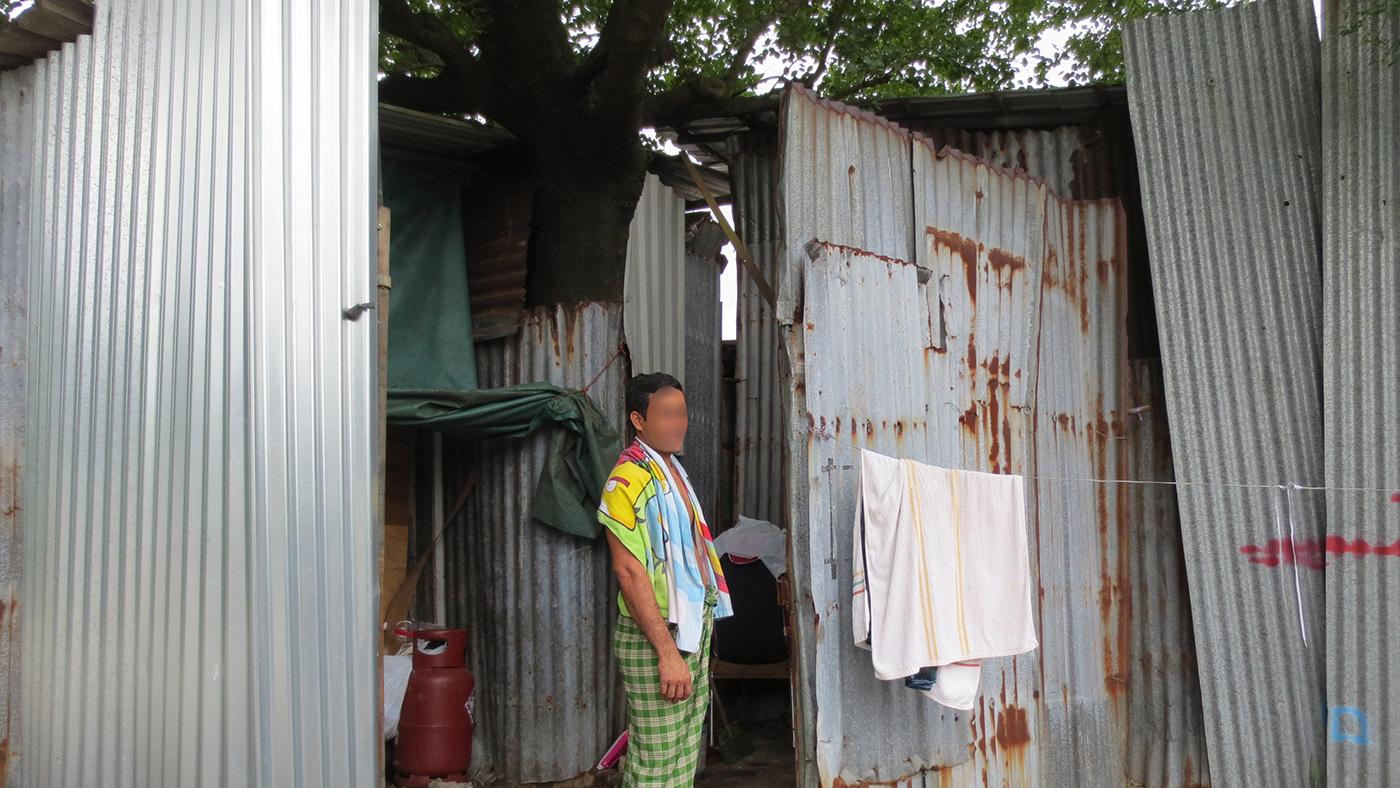 Several the “Bengali Eleven” arrested for fraud lived for years in the “Slum Under The Tree”, photographed above during a visit by Vision First in May 2013.

Five more asylum seekers and torture claimants in court for $170,000 fraud over allowances

Six asylum seekers and torture claimants in court for $190,000 fraud over allowances

EL PAIS – Hong Kong (also) turns its back on refugees