Vision First keeps records of rental amounts in Tenancy Agreements signed by refugees, as well as the rent assistance received to them by ISS-HK. Our data is collected at time of registration and generally updated during subsequent case work.

Technically the statement is correct, although it appears to be largely misleading. If the rent assistance were $100 per month, the statement would still not be false, because it glosses over the problem of rent balances refugees are forced to pay monthly without the right to work legally.

Vision First calls on the authorities to produce the data. The SWD has copies of the Tenancy Agreements entered between 8600 refugees (including children) and their respective landlords. Those are real rents paid in the open market, irrespective of the legality of dangerous slums and subdivided flats. The actual rent assistance received by each refugee is also known.

As way of example, we compiled a simple datase of the latest 100 Vision First registrations, out of a database of more than 2000 refugees. There are three data columns: “REAL RENT” paid by refugees to landlords; “ISS PAYS” to refugees in rent assistance; “NOTES” on individual housing arrangement. Without claiming to be representative of the wider situation, the table makes for interesting reading: 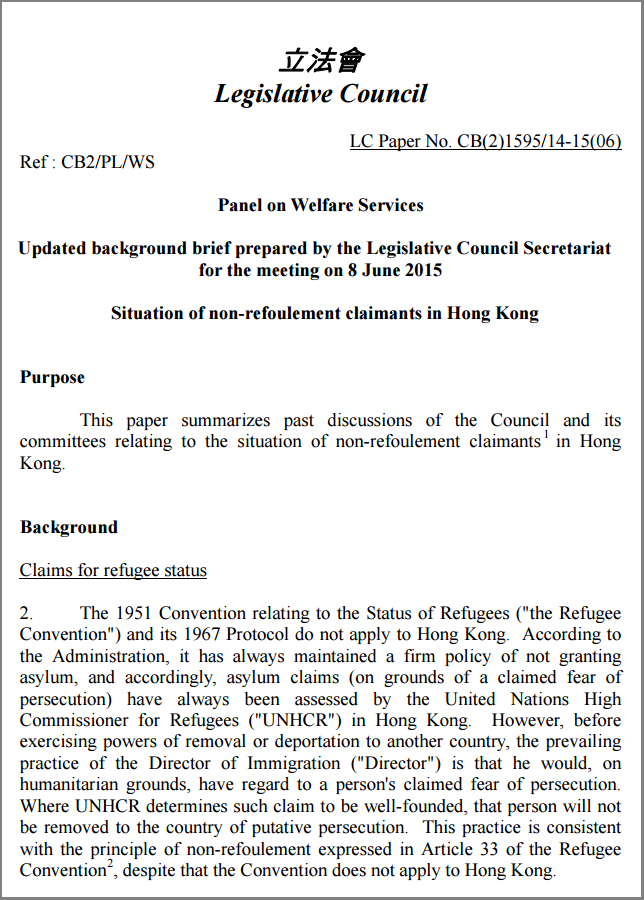 How things have changed! Veteran refugee workers recall a time not so long ago when the SWD didn’t reply to emails about problems faced by their clients, because the task was delegated to its service contractor. By comparison today the Refugee Union communicates daily directly with the SWD head-office to report failures, lodge grievances and request assistance.

It is equally unprecedented that in April 2015 the Refugee Union approached the Legislative Council Redress System and filed 500 complaint letters drawing attention to their plight and campaigning for improvements. Vision First takes credit for paving the way that gives a voice to the voiceless and empowers refugees to stand up for themselves and demand the changes needed by their community.

Following a preliminary meeting on 22 April 2015, the Hon. Fernando Cheung Chiu-hung invited the Refugee Union to discuss welfare concerns ahead of the meeting of the Legislative Council’s Panel on Welfare Services on 8 June 2015. It is noteworthy that refugee welfare made the Panel’s agenda in under two months, compared to nine in 2013. Is it an indication that the wellbeing of refugees has gained in priority over the past two years? If so, what factors contributed to this?

Discussing the topic at hand, a Bangladeshi refugee told Fernando, “I have been in Hong Kong for 15 years and I am not allowed to work. Things are getting better. It seems the government is listening to our complaints and treating us like human beings. I lived in the slums for many years. They are closing down this year after a refugee died in a fire. It is true that for $1500 [in rent assistance] we cannot get a room anywhere. The government should increase the amount to $2000.”

An African colleague commented, “It is unreasonable that refugee without money or jobs are forced to sign agreements with landlords. Isn’t this cheating? We commit to deals we cannot keep because we cannot pay for the high rent. Is it entrapment? This policy makes us delinquent tenants when we don’t pay. ISS case-workers urge us to get money from NGOs and churches, who say they are also struggling to fundraise. Instead we suggest that our case-workers sign the tenancy agreements with the mandate of the government. All we want is a safe place to sleep.”

A refugee mother spoke about the food, “The coupons are better. There are some problems we need to resolve, but generally people are happy. However we need competition as Wellcome prices are not always cheaper. ParknShop and Kaibo supermarkets should be included. Why not give refugees an Octopus card accepted by these three supermarkets? Or Wellcome could match the lowest prices offered by competitors because already [the food allowance] is too little.”

A Pakistani added, “Yes, the coupons are good. I received $1200 also for my children and I hope it is the same for all families. It is impossible to live on $40 food so many refugees must work. The food allowance should be increased to $1500. Also, we don’t get dish soap or toilet paper [one roll a month] and razors [one a month] break in our hands. The SWD should save the money of toiletries, staff and storage to give us one more coupon to buy what we really use.” A woman then described sanitary pads considered of dreadful quality, unsafe and unhygienic.

The Hon. Fernando discussed these and other issues with the Refugee Union members, displaying genuine concern and a determination to push for improvements at the Legco Panel on Welfare Services on 8 June 2015. He noted that the 45 minutes allocated would only allow for the discussion of two topics, which were agreed to be rent and food – the greatest concerns of the community.

The previous increase in levels of assistance was introduced on 24 January 2014, when the monthly rent allowance was raised from $1,200 to $1,500, security deposits and estate agents’ fees were introduced and the food budget was increased from $1,060 to $1,200. Unlike the Comprehensive Social Security Assistance (CSSA) provided to needy residents, there is no mechanism to tie refugee assistance with inflation – an arrangement that ought to be considered by the Panel.

At 1pm on 28 May 2015 the first message about the food coupon distribution circulated on social media. A father of three informed, “Whoever will go to sign at ISS will receive 1200$ coupons, each coupon valued 100$…. But there are limited items to choose. Not all items [are available]. Toiletries will collect from ISS offices the day of signing.”

It was good news though a distressed refugee called Vision First later that evening after returning from his first experience at Wellcome. He said words to this effect, “I went to Wellcome, but there is no Halal food. I asked the staff and they say they don’t have it. Sir, what can I do?”

Long-time observers of the asylum sphere might agree that the policy shift from the staunchly supported in-kind food distribution to supermarket coupons is nothing less than remarkable. While the authorities are unlikely to publicize the underlying research and ensuing rationale for the reversal, the change might indicate government resolve to counter questionable practices.

From a broader prospective, Vision First has been informed that independent ethnic grocery shops in Kowloon are pleased with the development although profits from the new SWD tender (estimated at over 100 million HKD for food alone) will flow exclusively into the coffers of Dairy Farm, the owners of Wellcome supermarkets, listed on the London Stock Exchange and member of the Hong Kong conglomerate Jardine Matheson Group.

A shop owner explained, “The coupons will stop the trading of ISS supplies that halved the price of flour, sugar, oil and rice around the [ISS appointed grocery] shops. Other owners reported that the middlemen stopped re-selling [ISS food items]. They were buying it cheaply from refugees and selling it to shops, restaurants and residents. Also, a wholesaler said that business picked up because shops now buy from them after the cheap reselling stopped.”

Refugees have largely reacted positively, though some mothers complained they could not buy baby formula, despite others succeeding at different branches. A refugee posted, “One of my friends went to Waihong [Chinese name for Wellcome] and wanted to buy mill for her baby and the cashier said that she can’t buy the milk with the coupon. So what is the use of the coupon that we get from ISS if we can’t buy the milk for our babies?”

Another mother was told by her caseworker that baby formula was an accepted item, though others lamented that fresh milk was excluded. Although it represents a new disruption to refugee service that could have been reasonably prevented, it is understandable that a grace period may be required to resolve service variations. Another refugee reported, “Not all Wellcome shops are well-instructed. Out of 5 shops, only 2 are OK. One shop told me I can buy only rice and noodles, nothing else.”

On the other hand, a Refugee Union member posted, “Some people from Sham Shui Po called me today. They are very happy with [the food coupons] … Yesterday I talked with one Wellcome saleswomen. She said they are preparing all the kinds of food for us. They need a little more time. And as I know that electronic coupons are coming also. So let’s wait and see.” Could this refer to an Octopus-like card replenished by ISS-HK monthly that would allow less than 100$ purchases as change is not offered for the coupons?

Finally on a positive note, a lady posted a photo of the groceries she collected from Wellcome with the comment, “This is what I buy from Wellcome today and all is OK” Her message received an encouraging response from another refugee, “As for the adult foods, we are OK. We were able to get want we want and of good quality. WE ARE HAPPY. WE FEEL THAT WE ARE HUMAN WHO CAN ALSO PURCHASE IN SHOPS JUST LIKE ANYBODY ELSE. AND FOR THIS WE THANK VISION FIRST AND THE REFUGEE UNION.” (original emphasis)