On 4 March 2015 Vision First received five phone calls from several fire stations in the New Territory, referring to a list of refugee slums submitted for inspection. Fire Service Department (FSD) officers asked, “We are going to visit some of the slums shown on your website. May we ask the exact location? Could you pinpoint it on a Google map for reference?”

With a sense of urgency, the officers informed that they could not wait for a joint inspection because they were already on the way to Ping Che where the first 6 compounds on our list are located. They spoke about ‘deploying contingency plans’ and being tasks to conduct immediate investigations following various complaint letters and emails by Vision First.

Considering that we first communicated concerned about slum fire hazards in 2013, perhaps priorities changed in the wake of two events: 1) the death of a refugee in a blaze on 29 January 2015; and 2) the explosion of gas cylinders in a slum fire on 25 February 2015. These are incidents that supposedly would grab the attention of professionals tasks to protect people and property from fires.

Since time was of the essence, we suggested contacting the Refugee Union which has coordinators in every district and most rural villages, including Ping Che, from where the struggle against dangerous housing supported and subvented by ISS-HK started in May 2013. The FSD appreciated the suggestion and met a Refugee Union representative to inspect several slums yesterday.

For some utterly bizarre reason the Fire Service Department contacted an NGO (Vision First) and relied on the assistance of a society (Refugee Union), to locate and inspect refugee slums where public funds have been paid for years to purported landlords by a contracted agent (ISS-HK) of a government department (Social Welfare Department).

Why didn’t FSD ask SWD to pinpoint the slums on a Google map?

Could it be that the SWD remains clueless about the location of its refugee slums? And that would not be for lack of our offers to accompany them. It is increasingly perplexing that numerous law enforcement agents, Lands Department officers and Fire Services officers have inspected (many) slums, while the one department responsible for refugee housing prefers to remain in the dark.

Transcript of ONTV video on fires in the slums

We are deeply saddened by the arrest of a great political supporter, the Honorable Fernando Cheung.

Fernando stands apart for his commitment to refugees going back over a decade. Veteran refugees recall him visiting them in prisons and Immigration detention ten years ago, when the injustice they suffered didn’t yet register with the broader society and media as today.

Fernando has a special heart for all the vulnerable and disenfranchised people in Hong Kong, with no exception. He always displayed the very best of Hong Kong hospitality to refugees who suffer unjustly against government policies aimed at discouraging, rather than assisting, seeking asylum.

The charges seem political. Hong Kong Government is on a witch-hunt to punish the organizers of the Occupy movement that challenged their authority.

We fervently hope that justice will prevail.

Fernando did the right thing – he stood resolutely with the people unafraid of the consequences.

Hi I am Tariq member of refuge union, live in tsim sha tsui mansion 11 floor. Before we live 7 people in one room and landlord want to add 2 more people in my room. I stop her and she called the police and put fake knife case on me. I need your help sir. She collaborates with ISS, but she put 30 people in one room. She use ISS paper for rent home and use for guesthouse. Plz help me sir. 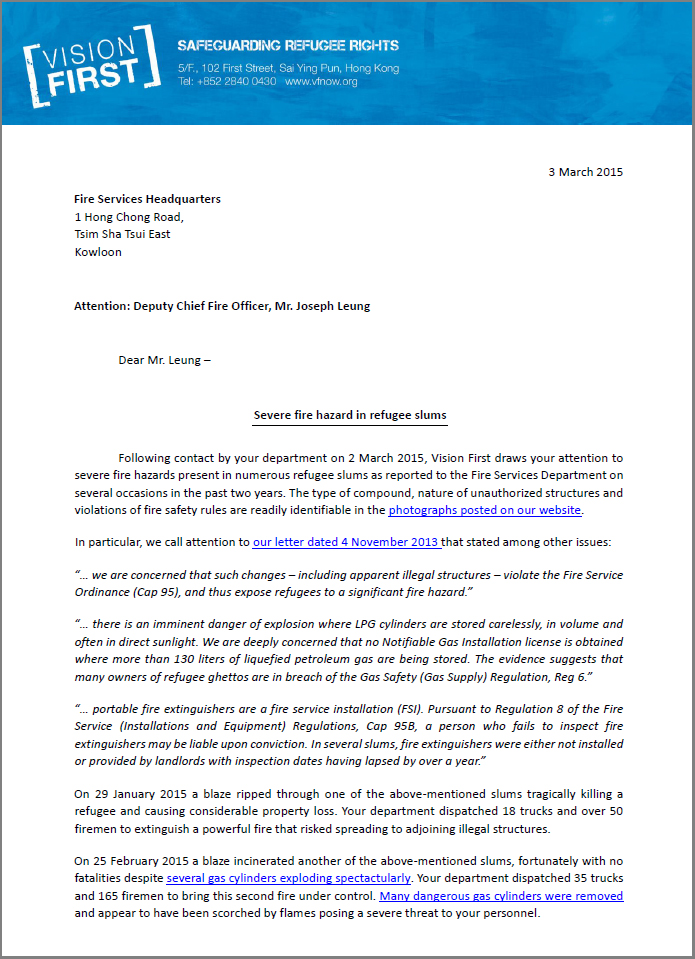 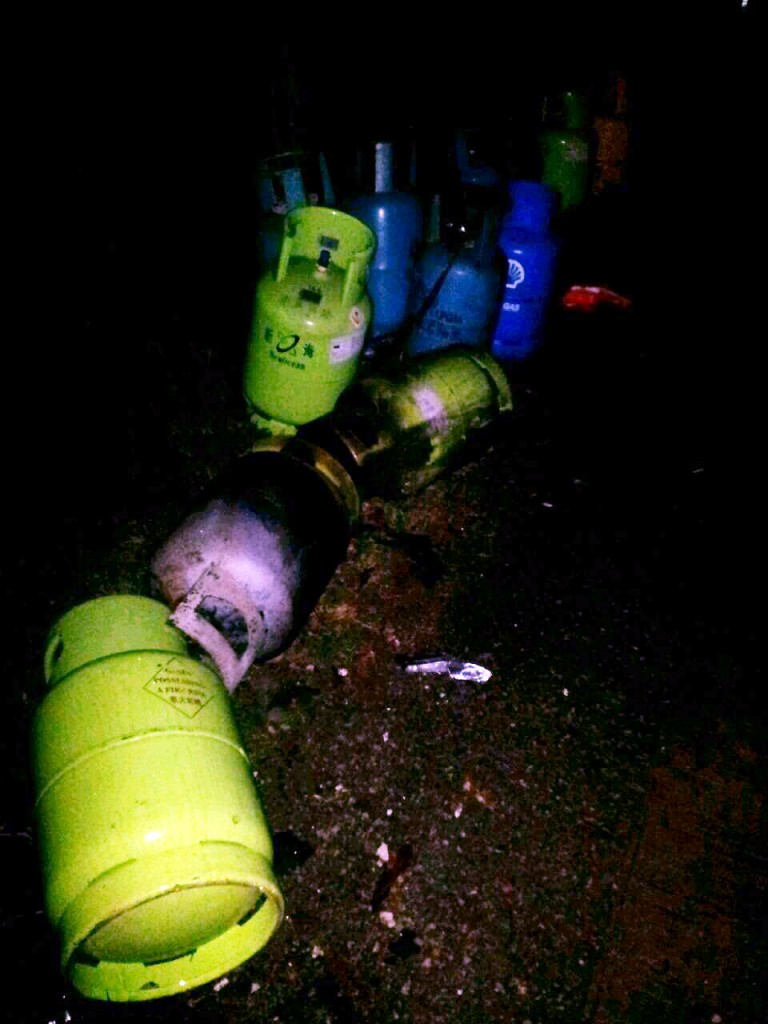 On the night of 25 February 2015, a dozen gas cylinders were removed by firefighters from “The slum with rusty gate” to prevent further explosions. Prior to the arrival of fire services, witnesses report hearing five large explosions presumably from other cylinders caught in the blaze.

The Unified Screening Mechanism (USM) will reach its first-year landmark on 3 March 2015 and the results achieved appear rather underwhelming and disheartening for refugees seeking the protection of Hong Kong Government. Immigration Department reports that as of 12 February 2015 five claims were substantiated, which Vision First understands to include 2 minors protected with their family.

The refugee community is concerned that in 23 years since the “UN Convention Against Torture” (CAT) was extended to Hong Kong in 1992, Immigration recognized only 28 cases as tallied by the South China Morning Post. Vision First sighted several Notices of Decision that included no less than 10 children counted as individual cases, thus further diminishing the impact of such unimpressive results.

Clearly statistics paint an incomplete picture, yet they are essential to evaluate the fairness of a screening process that accepted 5 claims and rejected 826 between March and December 2014 – a 0.60% acceptance rate that is deeply discouraging for 9618 individuals whose claims were outstanding at the end of last year. Some might suggest discouragement is the target here.

Granted that Immigration officers have at best one year experience with USM, we can only hope that high standards of fairness apply to determinations that are, “of momentous importance to the individual concerned. To him, life and limb are in jeopardy and his fundamental human right not to be subjected to torture is involved. Accordingly, high standards of fairness must be demanded in the making of such a determination.” (Court of Final Appeal “Prabakar” judgment, 2004)

“How do Immigration officers assess the situation in my country?” questioned an African refugee, “They don’t understand simple geography…. I have no confidence. Officers are not country experts. They print maps from the internet and learn from general websites that don’t explain the deep-rooted problems I faced. Shouldn’t I be worried about the quality of assessments?”

An Indian refugee said he had claims of police corruption in India rejected on the basis that India was a democracy and government websites called for a corruption-free administration in which offenders would be prosecuted to the fullest extent of the law. The claimant was faulted for having failed to report to the Police Anti-Corruption Bureau that village constables had drawn false charges against him allegedly upon the instigation of a rich and powerful land owner. Should he be deported?

There is a vast difference between what governments represent on official websites and law and order as implemented in the streets, where the enforcement action of anti-corruption bodies might not be taken seriously. That is the difference between theory and reality, the divergence between the rule of law and its application in the dark corners where human weakness prevails.

For that matter, police abuse in the cover of darkness isn’t unknown in developed countries.

onTV video on fire hazard in the slums