Will ISS-HK survive the fire?

It is reported that slum lords in Ping Che and Sheung Shui have stopped signing new contracts. Refugees have been notified that current tenancy agreements will not be renewed. Apparently ISS-HK is gradually closing down refugee ghettos. What’s the rush? Feeling the heat? Why would ISS-HK do this if no offence was committed by segregating refugees in ghettos?

Has ISS taken advice about fraud?

Has ISS taken advice about deception?

Section 16A(3) of the Theft Ordinance defines deceit, whether deliberate or reckless, by words or conduct, whether by any act or omission, as to fact or as to law, including a deceit relating to the past, the present or the future and a deceit as to the intentions of the person practising the deceit or of any other person.

Has ISS taken advice about conspiracy to defraud?

An agreement to commit the statutory offence of fraud may still be prosecuted as a conspiracy to defraud at common law. It has been noted that a conspiracy to defraud is an agreement to practice a fraud on somebody based on either dishonestly imperiling the economic interest of another or dishonestly acting to the prejudice of another’s rights. It may be directed against both private and public victims (HKSAR?)

If slum lords are worried, should ISS-HK be concerned about its involvement?

No. 40 – The slum with fire extinguishers

ISS-HK deals with complaints by locking its doors

In April 2006 the Social Welfare Department signed the first service contract with International Social Service (ISS-HK) to ensure, among other objectives, that refugees during their stay in Hong Kong, “would not be left to sleep in the street”.

In April 2006 the Government announced the “Voluntary surrender of pig farm licenses”. This incentive scheme encouraged pig famers to surrender their licenses voluntarily and cease pig farming to reduce associated public health and environmental pollution problems. At that time local farms supplied markets with 20% of fresh pork, a quantity later replaced by imports from the Mainland.

The ex-gratia payment to the pig industry was budgeted at HK$ 941,700,000 (min. HK$ 450,000 and max. HK$ 25,450,000) to close down pig sheds and surrendered licenses. As a corollary the Government introduced legislation to stop the issue of new licenses and froze the rearing capacity of those not joining the scheme. In brief, pig farming stopped and sheds lay empty.

For a while the farmers were content with the pay-outs, but they soon looked upon empty sheds and wondered how to redevelop them profitably. Most remain abandoned to this day, though a few unscrupulous landlords turned animal farms into refugee ghettos. It is unclear how the conspiracy started, though there is evidence that ISS pushed refugees to the farmers in 2007.

Vision First is investigating numerous violations of several ordinances. Chief among our concerns are violations of Section 25 of the Building Ordinance which specifies land use. With regard to breaches of Section 25, the penalties are defined in Section 40 as a level 5 fine (50,000$ per offence) and imprisonment for one year. More critically, the Government may impose an encumbrance, impairing the transfer and lessening the value of the land.

There is no excuse for conspiring with pig farmers to settle refugees illegally. 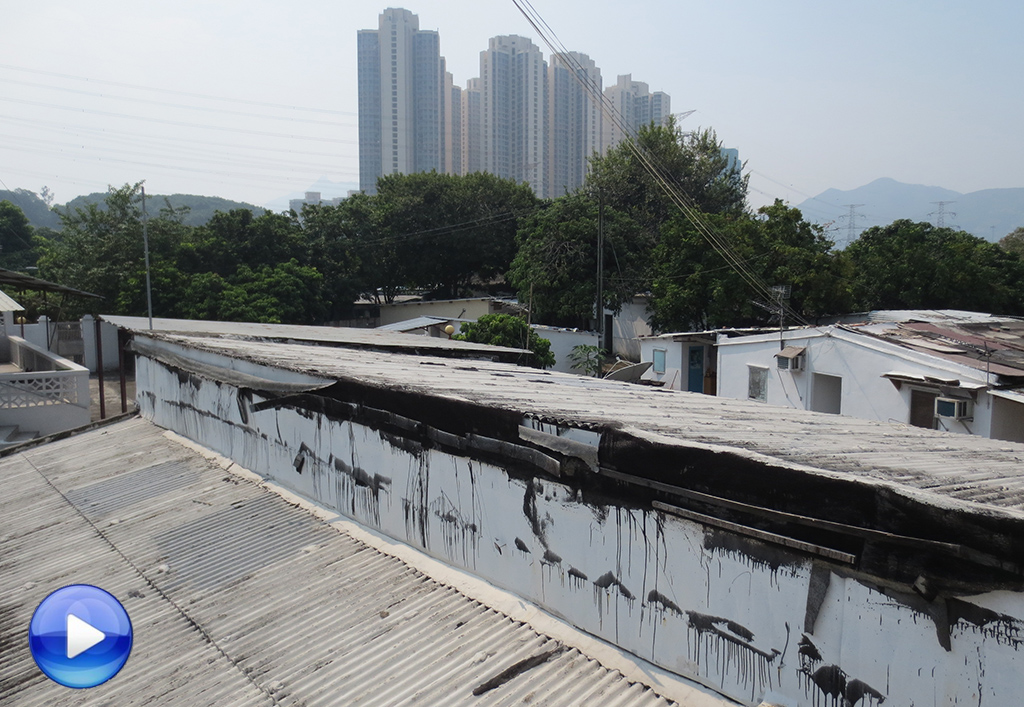 Against the segregation and oppression of refugees

ISS case worker tells refugee mother, “You have no choice!”

On 17 September, ISS Tanya Sze visited Rosy and her newborn baby in the Slum with the Honeymoon Room. Tanya approved the rundown hut and failed to offer a safe, clean and legal alternative. With a trick question, Tanya asked the mother, “Do you want to leave?” Fearing being homeless with a baby and to avoid confrontation, Rosy confirmed she wanted to stay. Tanya registered the answer she needed.

Tanya made no effort to relocate this family to a basic, decent room. Refugees live destitute and in fear of losing welfare assistance as they cannot work. As a result, they hold on to the only place they can afford, even tin shacks. When sleeping in the street is the alternative, huts are palaces. ISS Norma Chan led another refugee to a partitioned chicken farm and warned offensively, “You have no choice!”

The Social Welfare Department recently wrote, “ISS-HK has contacted over 110 asylum seekers and refugees who are living in areas not for residential purpose, and has been strenuously discussing with them for alternative accommodation. All service users concerned however prefer to stay at their current abodes which are secured by themselves.”

It is disingenuous these strenuous discussions amounts to offering a choice between living in the slums or sleeping in the streets – for adults and children alike. It is unreasonable to ask refugees “Do you want to leave?” without offering adequate rent and security deposits. Refugees cannot secure regular rooms when they don’t have two dollars to rub together. If Tanya and Norma can sign 1200$ leases without deposits and agency fees, then they are pulling tricks others cannot.

Through its own mechanism, over many years ISS-HK has systematically placed refugees into slums located across the New Territories. ISS has actively continued to do so despite the initial Ping Che slums were exposed to the public in May 2013. ISS sanctioned these illegal slums, putting refugees into inhuman, degrading and inherently dangerous conditions.

Before the slums were exposed to the public, ISS-HK had never asked anyone to leave the slums. It was only after they were exposed that ISS started asking residents to move out of known slums. This effort was clearly an ad hoc attempt to make the slums disappear. Of significance however, ISS continues to systematically push refugees into other slums not yet exposed by Vision First.

Further, ISS-HK created previous conditions that forced hundreds of refugees into shacks, namely, ISS refused to provide the necessary financial and in kind assistance to ensure basic necessities were met. ISS has never agreed to provide rental deposits and full financial assistance to allow any of the 110 asylum seekers to move out of illegal structures.

Currently ISS-HK is settling refugees into guesthouses. ISS is promoting rooms in Chung King Mansion that were banned as insalubrious in 2010 while the secretive slum policy expanded away from the public eye. Today outlying slums are more troublesome for ISS than seedy guesthouses that are nonetheless legal.

It is shocking that the ISS-HK blames refugees for staying in slums when it is obvious they have failed to secure residential flats with long term leases for them to relocate to. It is also apparent that the Social Welfare Department has failed to inspect the various slums to ascertain the actual zoning, living conditions and circumstances that ISS has sanctioned for refugees with government funds.

For six and a half years our situation is unchanged here. Each day we die and wake up again. Why? Because we don’t have any choice. We are very peaceful people. Everyone respects the law. We are only waiting for a fair decision from the Immigration Department.” – Tariq, Pakistan

The slum with tin houses

A half hour walk into the fields from the waterway south of Yuen Long, is a ghostly shantytown. It has a hard reputation. Triad gangs have attempted to control this area and clashes have erupted which authorities cannot break up in this remote area. Many refugees have left this isolated area to live closer to town.

Currently twenty refugees from Nepal, India, Pakistan and Bangladesh live here. They hate this area and want to move away, but don’t have money to secure better homes. Owned by two brothers and a sister, this shacks are falling apart with rot and corrosion. It is hard to tell what this area used to be, probably a shanty-town abandoned by local residents in years gone by.

There is a sense of desolation that wasn’t experienced in other clusters. Perhaps the history of this place is darker than usual. Something unsettling kept us on edge as we visited these refugee homes that still felt ‘temporary’ after three or four years of inhabitation.

ISS would be hard pressed to demonstrate that these residents want to stay in these remote shacks. The residents told us that they want to move but homes are too expensive and they are trapped in this miserable place. This is a sad, depressing site we were happy to leave.

click images to visit the Slum with Tin Houses

A fresh protest outside the offices of a government contractor dealing with the welfare of asylum seekers has passed off peacefully. More than 50 asylum seekers joined rights group Vision First to complain about a new distribution policy they say is leaving them hungry.

International Social Service Hong Kong (ISS-HK) recently increased the number of times asylum seekers can collect food from the service, from three to six times a month. But users of the service say they are not receiving any more food than they were before the increase.

One asylum seeker, who wished to be identified only as Jenat, said yesterday she could not manage to feed herself or her three children. “It’s punishing,” she said. “We can’t eat all the time, sometimes only once a day because we don’t have enough.” “Most of the service users are satisfied with this change,” said ISS-HK in response to the protest. “There are individuals who … consider it troublesome to collect their food six times a month.”

The contractor will address “legitimate” concerns, it said. “This new policy oppresses refugees through the manipulation of food supplies,” said Cosmo Beatson, executive director of Vision First. “The alteration [in collection times] masks a reduction in groceries supplied.” A previous demonstration ended in scuffles with police as protesters attempted to storm ISS-HK’s office.

Asylum seekers plan to go on hunger strike next month outside Legco offices ahead of the expected announcement by the government of sweeping changes to welfare provision.

The child of refugee parents from Africa looks on during a protest to demand changes to a food distribution that they say fail to meet refugee needs in Hong Kong on September 2013. Hong Kong may be one of Asia’s wealthiest banking and luxury hubs, but the picture is very different for hundreds of asylum seekers forced into slum-like conditions as they scrape a living in the city, say campaigners.  AFP PHOTO / Philippe Lopez  / Getty Images