In pre-industrial, agrarian society the needs of the vulnerable were generally met by family, kinship provisions, neighbourhood, informal support networks, religious institution and the charity of the rich based on normative values of empathy, mutual help, locality ties and religious beliefs. The state offered no institutional assistance.

In modern times, these informal arrangements were admirably taken over by the state in the interest of “those who are not capable without help and support of standing on their own feet as fully independent or self-directing members of the community”. It was understood that “welfare addresses social needs accepted as essential to the well-being of a society. It focuses on personal and social problems, both existing and potential.” (HK Gov 1965 + 1991 White Papers).

Nonetheless, with 1.5 million citizens living in poverty, and thousands more struggling to afford three square meals a day, the Hong Kong welfare model is often considered an embarrassment. The administration falls short of fully mobilizing its considerable resources to alleviate the emotional and economic suffering of its most vulnerable citizens.

In reality, scholars tend to see local welfare as a residual system. That is welfare that only partly ameliorates the failures of the market economy, precisely because the privileges of the rich in society should not be undermined by a burdening tax system that is claimed would inevitably become needed were more services needed by larger numbers of welfare claimants.

After decades neglecting refugees, the government provided welfare in 2006. But the authorities persistently reiterate the service is “to prevent destitution while not creating a magnet effect which may have serious implications for the sustainability of our current support systems and for our immigration control.” In other words, this is another form of residual welfare.

But here is the catch. Uprooted from family, kinship and locality ties, refugees in Hong Kong are displaced and deficiently assisted by support networks, institutional services and charitable organizations. The assistance levels provided by the government condemn them to dire poverty that is compounded by the denial of work rights and 15 months imprisonment for those arrested working.

As opposed to a solidarity model based on principles of mutual responsibility, a residual welfare model offers a partial safety net confined to those who are unable to manage otherwise, with the assumption that they are able to locate further sources of assistance on their own. This notion then suggests that 10,000 refugees in Hong Kong ought to supplement inadequate government assistance through hand-outs from family, countrymen, neighbours, religious institutions and NGOs … or by working illegally.

Policies directed against the poor have to do with the government abdicating its duty to alleviate distress and poverty, as much as with crafting a hostile environment in which an undesirable foreign class adapts by resorting to all sorts of social tricks and risking arrest for doing something illegal because they have no choice. A case in point is a refugee who already has 5 convictions for theft. He candidly explains, “I steal baby formula because easy to sell. If police arrest me I go prison 2 to 3 months. If I am arrested working I will go prison for 2 years because of prior convictions.”

The expectation of self-reliance from refugees who frequently don’t know a soul in town is absurd. They report the absurdity of the residual welfare system through suggestions commonly made by their case workers: 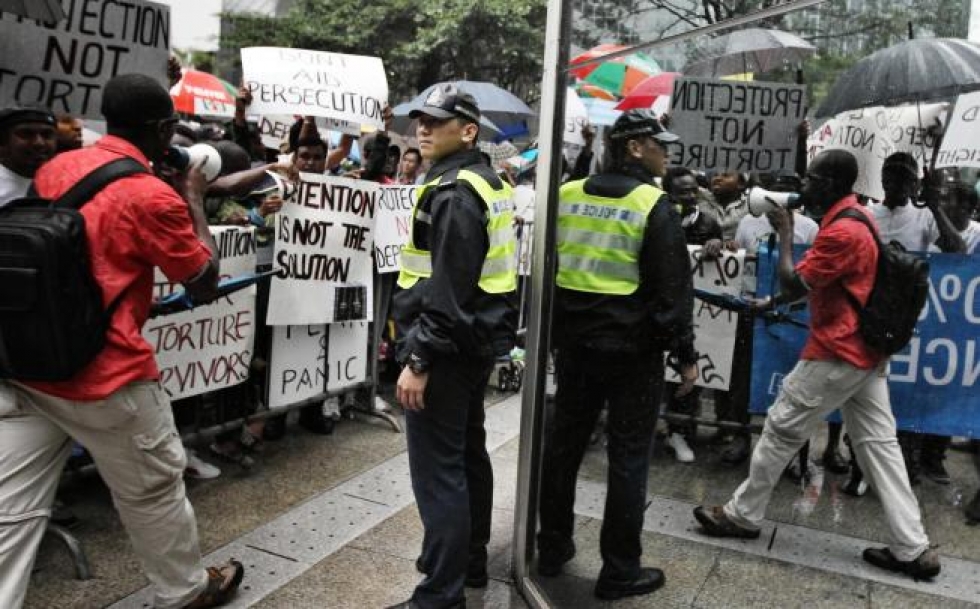