The emergence of the refugee activist is contagious! Over 2013 and 2014, Mr. Akhter Rana Shahid filed complaints against several government departments and the ISS-HK for these bodies were argued to have failed to protect him. The complaints were dismissed.

We do like to take this opportunity to contribute our views as the matters raised by the plaintiff are, we believe, of public concern. Although we haven’t had the pleasure of meeting Mr. Akhter Rana Shahid, we think the grievances dismissed by the Court of First Instance in HCMP 3094/2013 may not be as frivolous and vexatious as they certainly appear at first sight to unconcerned readers.

The following considerations should be made.

First, while the plaintiff filed separate complaints against the Immigration Department, Police, Social Welfare Department, Legal Aid and the ISS-HK, there seems to be a common thread that unites them: the lack of a comprehensive asylum procedure that causes refugees intolerable hardship. Some failures were listed by the seven originating summons, interestingly against some of the agencies at the forefront of the government attempt to contain, or simply manage, the asylum ‘problem’. In this vein, we are left with the uncomfortable feeling that the confused and scattered issuance of summons, as well as the unclear arguments put forward by the plaintiff, alleging circumstances that seem to miss the point though sound plausible, may be explained by the lack of legal representation. A paucity of Legal Aid approvals and the rarity of pro-bono support are issues that undeniably thwart refugees who resort to legal proceedings in person, hoping to find a sympathetic ear and justice. It is significant that on the one occasion that Mr. Shahid had legal representation he was awarded compensation for unlawful detention.

Second, in the burglary case, it is unclear how the investigation unfolded, but two issues seem clear. The plaintiff alleges he found a burglar in his home, and the burglar was surprisingly his landlord. Whether this person was in cahoots with ISS-HK is debatable. What seems plausible is the fact that, for political reasons, refugees are placed in a state of vulnerability that is implemented by ISS-HK, thereby drawing upon this agency the ire of refugees, with a predictable eruption of problems and confrontations. Further, the ISS-HK services, or lack of, can be said to cause innumerable disputes between refugees and bottom-tier landlords. It is accepted that refugees are compelled to settle in certain rooms, and at certain restrictive conditions, due to insufficient rent assistant. It is not new to us that some landlords take justice into their own hands and, if rent is not on time and in full, think nothing of threaten tenants, cutting electricity and water, locking them out of their homes and even stealing from them, safe in the knowledge that refugees (women in particular) often hold back from reporting such criminal behaviour to the police. When reports are made, police intervention generally dismiss such incidents as ‘personal matters’.

Third, the background situation raises grave concerns about the well-known problem of the welfare assistance to refugees being wholly inadequate. The glaring shortcoming is predicated on the misguided rationale that such benefits are indeed not welfare, but humanitarian assistance provided in-kind and only in a measure sufficient to prevent destitution, while discourage hopeful asylum seekers from coming to Hong Kong. The logic of this political decision is challenged by the evidence of widespread suffering across the refugee community, hardly justifiable by deterrent objectives. Despite a shameful reality plain for anyone to observe, inhumane policies and practices persist. Further, the ISS-HK and SWD assistance package is rarely vigorously challenged in court where the judiciary commonly takes the view of its sufficiency, as in the numerous cases of refugees convicted for taking up employment merely to pay rent and buy food. One can only query why and to whose advantage?

Fourth, while it is the duty of the Legal Aid Department to assess the merits of each application and prevent the waste of public funds in frivolous and vexatious claims, it is doubtful that Mr. Shahid was in a position to present full particulars and evidence in a professional manner without the assistance of a lawyer. We are not told the details, but a few questions come to mind: Did the police readily furnish records of the burglary investigation? And did ISS-HK provide details of partial rent payments that precipitated the plaintiff’s relationship with his landlord? Logic presumes that, if refugees are to be banned from working, then Hong Kong government should arrange accommodation and, if necessary, pay rent in full. Did the plaintiff make this critical connection clear to Legal Aid? Can refugees acting in person in court be reasonably expected to grasp legal requirements and procedures? That is, should they know how to present cases by themselves against well represented defendants? Can anyone in such a fraught state of mind (i.e. feeling persecuted at home and in HK) produce a compelling case to take on the Justice Department alone?

Ultimately, we believe that something important should be learned from Mr. Shahid’s troubles. His legal actions, though defeated, make public the desperation of a refugee who attempted in several ways to find a place in society and relied consistently on the authorities to be treated fairly. Each time he was frustrated by the lack of justice, actual or perceived, that he believed he deserved. It seems obvious that there is a mismatch between his reasonable expectations of living in a fair and just society, developed by any standards, and the reality of finding himself in a place that intentionally dehumanized him. Government deterrent policies against asylum seekers might be effective in disillusioning present asylum seekers, but why do asylum seekers keep coming and arrive with little or no knowledge of actual conditions? In such light, are the prevailing deterrent measures failing? Or is the deterrent rationale simply a measure to punish those already seeking asylum in Hong Kong, rather than discouraging others from making the journey? 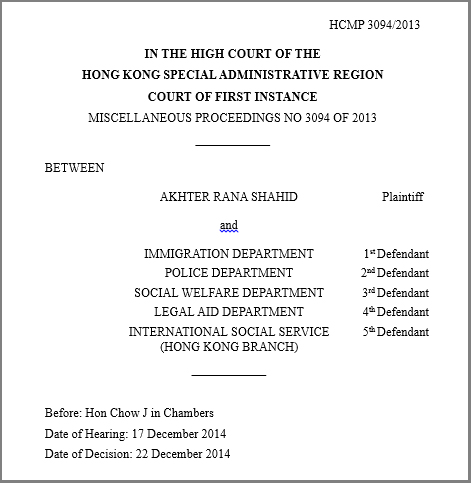