Vision First reports the case of a Bangladeshi refugee who sought asylum in 2008 and is still genuinely fearful of the danger he would face should he be returned to his country. His non-refoulement claim was rejected at first instance in September 2014 after more than six years of deliberation. The claimant is aware that Hong Kong has a perfect zero percent acceptance rate of Bangladeshi refugees since 1992. (Compare yearly acceptance rate of >40% in Australia)

On 7 October 2014, on routine reporting to the Immigration office in Mataukok, the claimant was summoned to an interview room where he was warned of imminent removal despite having filed an appeal with the Torture Claim Appeal Board within the allocated time. The claimant stated emphatically that he spoke little English and had trouble understanding what was being said to him. Of significance, neither a Bengali interpreter, nor a duty lawyer were present.

It is unclear what was discussed during the interview. The claimant reports that significant pressure was exerted on him to sign a document the significance of which he did not comprehend. While he had not requested to voluntarily depart Hong Kong, the Immigration officer handwrote a notice that he was made to sign. The document stated, “I understand if my appeal was also refused, I need to go back to Bangladesh”. Only after signing the document was the claimant allowed to leave the room.

The claimant warned the officer that his life would be in serious danger if he was returned to Bangladesh where political enemies were still searching for him eight years after he fled to Hong Kong. He first politely requested a photocopy of the notice and explained “because I don’t know what is says”. But a shouting match followed in which the officer refused to provide a copy and the claimant refused to leave. Eventually the officer left the interview room and returned five minutes later with a photocopy of the document.

On 9 October 2014, the claimant registered at Vision First seeking assistance against what, in our view, amounts to de facto rendition – the practice of handing over individuals from one jurisdiction to another with questionable consideration of the legal process. Facts lead us to believe that the notice was prepared as an acknowledgement and, by implication, a consent by the claimant to be removed to Bangladesh after his appeal will be rejected.

While circumstances surrounding this event are unclear, the claimant reports being intimidated by the conduct of the Immigration officer and being fearful of detention pending the outcome of his appeal, whereby he would have been denied an opportunity to apply for a judicial review at the High Court.

Vision First never before sighted such a handwritten notice which is inconsistent with domestic and international legal principles. It purports to represent an unconstrained declaration by a refugee who seems unwilling to pursue further legal remedies after the likely rejection of his appeal case, but actually its production is both sinister and disturbing. The notice is manifestly neither a legal document, nor a standard Immigration form. Vision First emailed its concerns to the Immigration Department and will monitor the liberty of this claimant.

Refugees are strongly urged not to sign documents from government departments, Immigration in particular, which they do not fully understand and for which legal advice and professional interpretation was not provided. If in any doubt, the correct procedure is to take the documents away to seek independent legal advice before signing them. 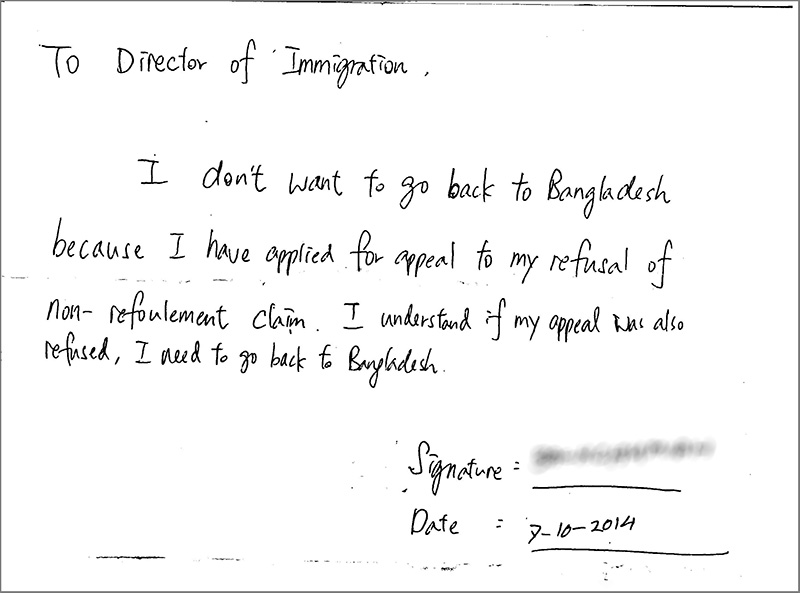